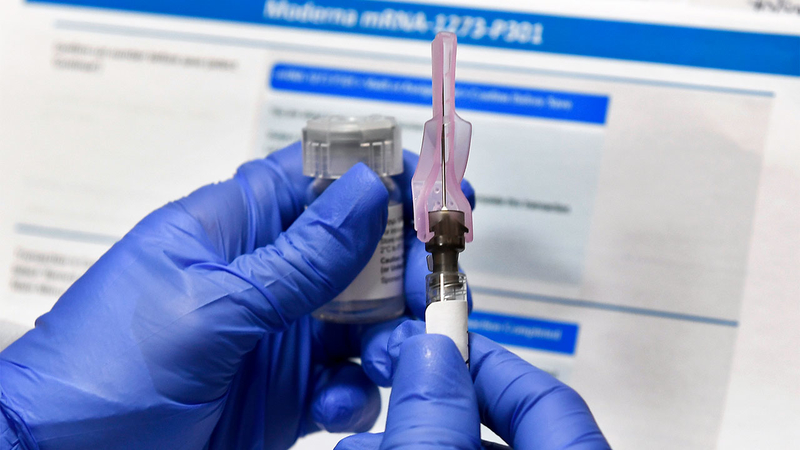 At least 351,000 lives have been lost to COVID-19 in the U.S., since the beginning of the pandemic, according to data collected by Johns Hopkins University -- representing approximately 19% of the total global death toll of 1.8 million COVID-19 related deaths.

The grim milestones come on the heels of the worst month on record for cases, deaths, and hospitalizations. Between December 1 and December 31, 77,082 deaths were reported in the U.S., and over 6.25 million cases were recorded.

COVID-19 numbers are expected to surge across the country in the coming weeks following the winter holidays, similarly to what happened after Thanksgiving.

What to know about coronavirus:
When can you get the COVID vaccine?
Where to get tested in New York, New Jersey and Connecticut
Coronavirus by zip code - New York City
Do you have coronavirus symptoms?

Mayor de Blasio sends VP Pence letter outlining vaccine requests
On Monday, New York City Mayor Bill de Blasio sent Vice President Mike Pence a letter outlining the city's vaccine requests to the federal government. Among the written requests include support for increased speed of vaccine manufacturing to increase overall supply and the allocation of additional vaccine doses to the city and other nearby areas. In addition the mayor is also asking for the government to provide greater advance notice of dose allocation quantity and delivery schedule for planning purposes.

Select NJ ShopRite Pharmacies distributing COVID vaccines
ShopRite announced Monday that 39 select pharmacies in New Jersey are set to administer COVID-19 vaccines to healthcare workers as part of its partnership with the state , the U.S. Department of Health and Human Services (HHS), and the Centers for Disease Control and Prevention (CDC). ShopRite pharmacies are following the federal government's distribution schedule, and are taking a phased approach to the vaccine's distribution, focusing on those individuals at highest risk of exposure. In this first phase, persons working in the healthcare profession are prioritized to receive the vaccine.

Alex Trebek urges 'Jeopardy!' viewers to open hearts to COVID victims
In a message taped for what turned out to be his final week as "Jeopardy!" host, Alex Trebek urged the game show's viewers to honor the season of giving by helping victims of the coronavirus epidemic.

Trebek's plea aired in the opening moments of the show that aired on Monday.

Sandy Hook massacre 1st responder dies of COVID-19
One of the first Connecticut state troopers to respond to the 2012 Sandy Hook Massacre has died of COVID-19.

Connecticut State Police announced that retired Trooper First Class Patrick Dragon #705 of Brooklyn, Connecticut, died of the virus on Jan. 2. Dragon served as a state trooper until 2018 when he began working as a police dispatcher in Foster, Rhode Island.

Newark school official demanding for COVID testing before in-person learning begins
A top teacher official in New Jersey is demanding all teachers and at least the students from middle school and up, be tested for COVID-19 before any in-school instruction happens. President of the Newark Teachers Union John Abeigon says nobody wants to get back more than teachers, but only in a safe situation. Testing is widely available in Essex County at places like Lincoln Park and Branch Brook Park, and several others in the city.

Edison Licensing Center will be closed until Tuesday, Jan. 12. The employee who tested positive was last in the Edison Center Monday, Dec. 28.

Somerville Vehicle Center will be closed until Friday, Jan. 15. The employee who tested positive was last in the Somerville Center Thursday, Dec. 31.

New variant found in New York
Gov. Cuomo announced a case of the new COVID variant has been identified in Saratoga, New York. The case is a man who works at a jewelry store and three other people associated with the store have tested positive for COVID, but it is not yet clear if those three cases are the new strain or not.

The store is N Fox Jewelers on Broadway in Saratoga Springs and anyone who visited the store is asked to get a test. The man with the variant did not travel, so Cuomo says evidence suggests it is in the community.

New lockdown in the UK
British Prime Minister Boris Johnson has announced a new national lockdown for England until at least mid-February to combat a fast-spreading new version of the coronavirus. Johnson said the country is at "a critical moment," with cases rising rapidly in every part of the country.

Under the new rules, which are set to come into effect as soon as possible, primary and secondary schools and colleges will be closed for face to face learning except for the children of key workers. University students will not be returning until at least mid-February. All nonessential shops and personal care services like hairdressers will be closed, and restaurants can only operate takeout services.

New York City critical care nurse given first COVID vaccine in US gets second dose
A New York City frontline worker who was given the first COVID vaccine in the US received a second shot Monday. Sandra Lindsay, the director of critical care at Long Island Jewish Medical Center (LIJ) in Queens, got the all-important second Pfizer dose to lock in immunity against the virus.

NY Health Care Workers Get Vaccinated
Health care workers who are not hospital workers -- those who are in private practice or work in clinics -- began getting their vaccines in New York City and New York State. Northwell Health, which operates North Shore Long Island Jewish Medical, is among the health systems bringing the vaccine to those workers.

University Hospital workers in Newark getting 2nd dose of Pfizer vaccine
Health care workers in New Jersey who were the first in the state to get the COVID-19 vaccine are receiving their second doses Monday. The vaccine roll out has been slow nationwide, but Governor Phil Muprhy and Health Commissioner Dr. Judy Persichilli were on hand to watch the follow-up doses taking place at University Hospital in Newark. First up was Maritza Beniquez, a 56-year-old emergency room nurse who was the first to be vaccinated in New Jersey.

NCAA to play all 67 March Madness games in Indiana in 2021
The NCAA announced Monday that this year's 67 men's basketball tournament games including the Final Four will be played entirely in Indiana. Games will be played on two courts inside Lucas Oil Stadium as well as at Bankers Life Fieldhouse, Hinkle Fieldhouse, Indiana Farmers Coliseum, Mackey Arena at Purdue and Assembly Hall in Bloomington. Only one game at a time will be played at Lucas Oil Stadium. Championship weekend is still scheduled for April 3 and April 5. Preliminary round dates have not yet been determined.

Fauci: COVID-19 vaccinations are increasing in a 'glimmer of hope'
The U.S. ramped up COVID-19 vaccinations in the past few days after a slower-than-expected start, bringing the number of shots dispensed to about 4 million, government health officials said. Dr. Anthony Fauci, the nation's top infectious-disease expert, also said on ABC's "This Week" that President-elect Joe Biden's pledge to administer 100 million shots of the vaccine within his first 100 days in office is achievable. And he rejected President Donald Trump's false claim on Twitter that coronavirus deaths and cases in the U.S. have been greatly exaggerated.

UK rolls out Oxford/AstraZeneca vaccine
Britain on Monday took another giant step in the fight against COVID-19, ramping up its immunization program by giving the first shots in the world from the vaccine created by Oxford University and pharmaceutical giant AstraZeneca. Dialysis patient Brian Pinker, 82, was the first to get the new vaccine shot, administered by the chief nurse at Oxford University Hospital. Pinker said he was so pleased and that he can "now really look forward to celebrating my 48th wedding anniversary with my wife Shirley later this year."

New York indicators
New York reported a statewide positivity rate of 8.34% on Monday, as well as 170 deaths. Hospitalizations also increased to 8,251, marking an increase of 288.

Busiest travel day of pandemic as COVID cases rise
The TSA screened 1,327,289 people at airport checkpoints nationwide on Sunday, Jan. 3. It was the highest checkpoint volume since the pandemic hit. It was also the 8th of the last 12 days and 11th of the last 16 days that throughput topped 1 million.


COVID Vaccine Calculator: Find out how many people may get a COVID-19 vaccine before you
Do you have coronavirus symptoms?
Where to get tested for COVID-19 coronavirus