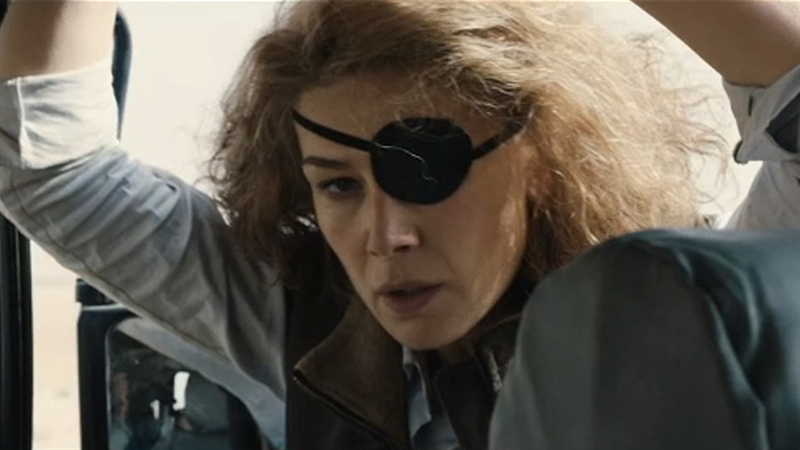 NEW YORK (WABC) -- One of the joys of my job is throwing a spotlight on a great film I don't want you to miss, and "A Private War" is one of just a handful of movies that can truly be called essential -- so important that it changes your outlook on life.

The late Marie Colvin was always a step ahead of other journalists, bringing so many wars home to millions of readers by risking her life to show the human face of conflict.

"I hate being in a war zone," she says in the movie. "I also feel compelled to see it for myself."

For a decade, she saw more war than most soldiers. She also lost sight in one eye and suffered from alcoholism and an acute case of Post Traumatic Stress Disorder.

"I have nightmares every night," she says.

Rosamund Pike embodies Colvin so completely, her character so complex and fascinating.

I'm willing to declare the Oscar race for Best Actress over, because if it were up to me, I'd just go ahead and give her the trophy now.

Jamie Dornan, best known for the "Fifty Shades of Grey" movies, is just right for a completely different role as her photographer.

"A Private War" is the best drama I've seen this year, but it also has the feel of an exciting documentary much like the movies director Matthew Heineman is best known for making.

His first feature film engages your mind and touches your heart in equal measure.

As Colvin explains, "War is not so terrible for governments, for they are not wounded or killed like ordinary people."

It's a tragedy that can be a tough to watch at times, but it's the most meaningful movie I've seen so far this year -- and the most compelling.

"A Private War" blurs the line between fact and fiction so masterfully, it is the first film in a long time I can honestly call a masterpiece.