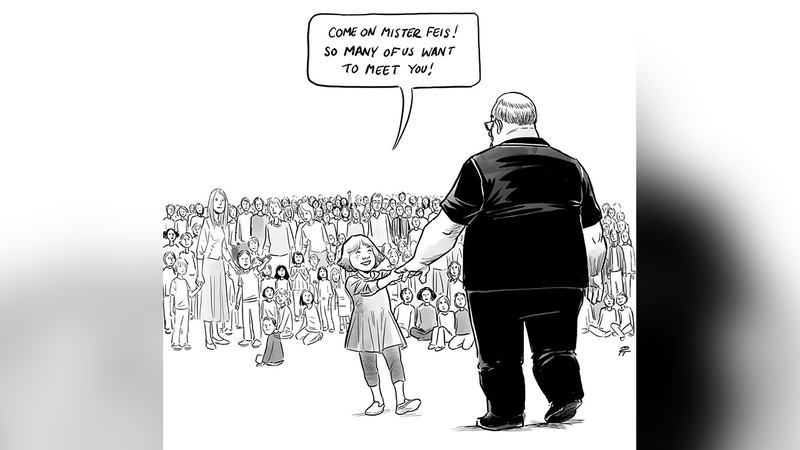 VANCOUVER, Canada -- A Canadian cartoonist's depiction of Florida school shooting victim Aaron Feis being welcomed into heaven might just bring you to tears.

The cartoon shows a wide-eyed, smiling young girl leading Feis by the hand toward a large group of children and adults, presumably other gun violence victims.

"Come on, Mister Feis! So many of us want to meet you!" the girl says.

Feis, an assistant football coach and security guard at Marjory Stoneman Douglas High School, has been hailed as a hero after he was fatally shot shielding students from gunfire on Wednesday, according to multiple eyewitness accounts. He was one of seventeen students and faculty members killed during that violent Feb. 14 rampage in Parkland, Florida.

"I wanted to take the standard 'all these angels are in a better place' trope and turn it around a little to show these wonderful, beautiful, brave lives...who should still be here to both prompt the viewer to ask why they aren't here while also paying tribute to Mr. Feis' act of love," Guerra told ABC News.

While Guerra is a Canadian with no children of her own, she said the tragedy in Parkland still hit her hard.

"How can anyone not find something to empathize with here? I don't have kids but I have a niece and nephew, a godson, a lot of friends of mine have kids who I admire the heck out of...how would I feel if this happened to them?" she said.

She said she hopes the United States will follow the lead of other nations in passing gun-control legislation and working to bring an end to the country's mass shooting epidemic.