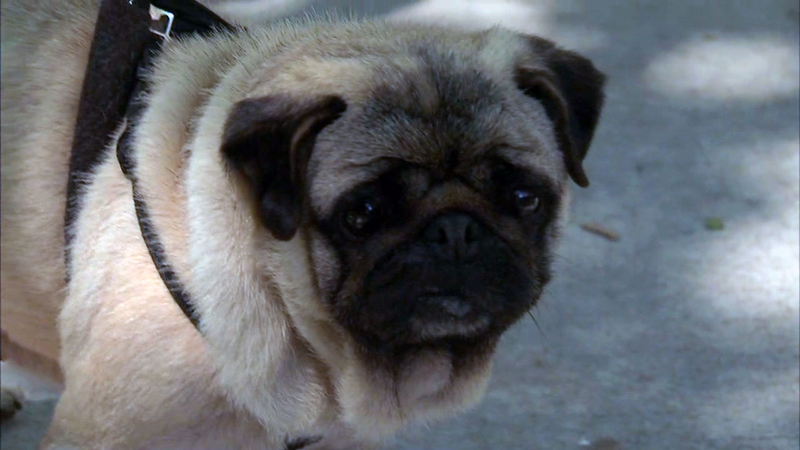 ABERDEEN, New Jersey (WABC) -- A man whose beloved pugs were stolen from his car two years ago has been reunited with one of the dogs after it was located in Texas.

"That's right, right Joyce? Now you're happy you're home?" Joe Savoca said. "She looks the same, and she's the same mentally. Like she never left."

Joyce and Basil were stolen outside a Goodwill store on Route 35 in Aberdeen on October 22, 2018, when Savoca left them in his 1989 Mustang while he ran inside.

His car did not lock on the driver's side, which is how the suspect was able to get inside the vehicle to take his dogs.

Panda cam: A giant panda at the Smithsonian's National Zoo may be about to give birth

He said at the time that he felt awful he did not stay with them, but he never could have imagined someone would be heartless enough to steal his pets.

A rescue group in Houston brought the dog to a veterinarian's office, where her microchip was scanned and the rightful owner revealed.

After one scan of her body, Savoca and his girlfriend's name popped up -- mystery solved.

"The dog was found in a rough neighborhood," he said. "A bad neighborhood in Houston just, the fella said she was just walking around."

Unfortunately, there is no information on Basil, but Savoca says he hopes he too will be found.

Still, he said he is so grateful to friends who searched locally, animal rescue in Texas, the vet, the foster volunteers, and the pilots who work with a group called "Pilots N Paws" who flew the dog for free.

Now, the family is focused on catching up after so much time lost.