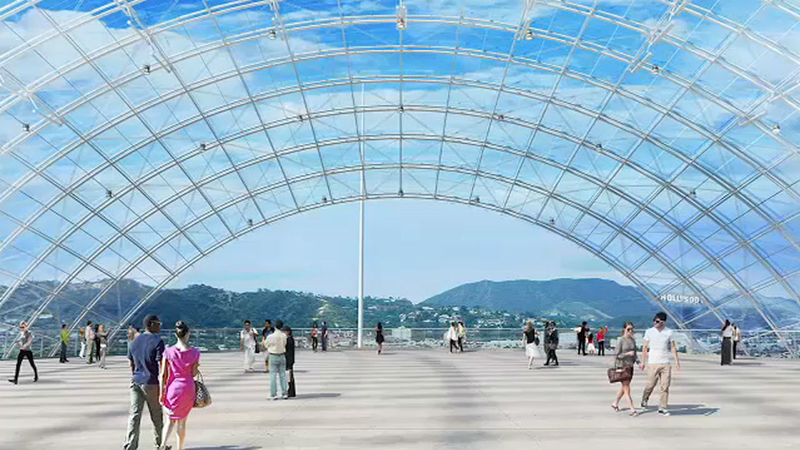 LOS ANGELES, California (WABC) -- There is no major museum devoted to the movies in Hollywood, but that's about to change as the folks who put on the Oscars are a year away from building an Academy Museum of Motion Pictures.

For a film geek like myself, there's no better assignment than putting on a hard hat and touring the facility. Thanks to the Academy, I spent a morning at the massive construction site where a long held dream is coming to fruition.

"I'm almost overwhelmed standing here," Academy CEO Dawn Hudson told me as we stood on the roof of a sphere designed to hold a one-thousand seat theater. "See a history of cinema you haven't found before. It'll be a true history, and it'll be a broad spectrum of cinema."

Along "The Miracle Mile" in LA, a historic building that once housed The May Co. department store is being restored, transformed and connected to a sphere designed by famed architect Renzo Piano.

"It's sitting on top of columns," former Academy President Sid Ganis said. "There are four of them holding up 26 million pounds of concrete, steel and glass."

The columns support the equivalent weight of more than two dozen commercial airliners.

Inside, a state-of-the-art movie theater is being constructed.

Hudson said the idea is to appeal to film fans and casual moviegoers and everyone in between.

"My son's a big fan of Seth Rogen and comedies, and you'll be able to come here and learn more about movie making and why he's funny," Hudson said.

The Academy is, of course, best known for giving out Oscars.

"Oscars very important obviously, but really this is a museum about international cinema," Museum Director Kerry Brougher said. "It's not a museum about the Oscar."

And, Brougher said it's not your grandfather's museum, either.

"Maybe immersive is a good term," Brougher said. "You actually feel as if you're someplace else, that you've gone to another world."

The total bill for all this is approaching $400 million, much of the total paid for by the movers and shakers in the movie industry.