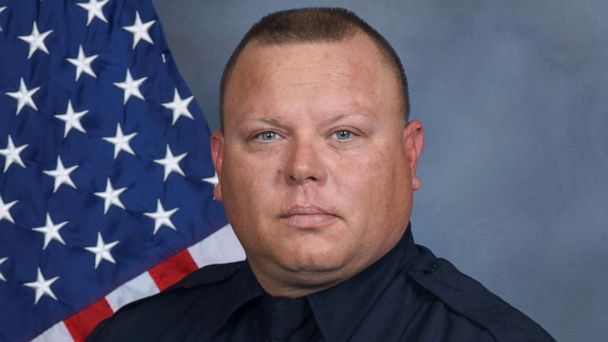 The state of Alabama is mourning the seventh law enforcement officer to die in the line of duty this year.

During a drug bust investigation in Huntsville on Friday, officer Billy Fred Clardy III was shot by "a known offender," who was expected to drop off a large amount of drugs to the undercover officers, according to a statement issued by the Hunstville Police Department on Saturday.

The gunman, identified by police as LaJeromeny Brown, allegedly shot Clardy in an area not covered by his bulletproof vest before fleeing on foot. Brown, 41, was taken into custody on Friday night and charged with capital murder of a police officer, according to Madison County online records.

Hunstiville Police Chief Mark McMurray said Clardy died at the hospital Friday night and the doctors "did everything they could" to save his life. Clardy was 48.

Clardy's father, Billy Fred Clardy Jr., was killed in the line of duty with the Huntsville Police Department on May 3, 1978, officials said.

"[He was] also an exceptional police officer with many career accomplishments," the police department said in a statement. "He started his career working North Huntsville as a patrol officer. He quickly moved to become a Community Relations Officer for several years, became a part of the very first HPD Anti-Crime Team and then became a STAC Agent."

Clardy, an Army veteran, is survived by his wife and five children.

"It has been an exceptionally tough year for our law enforcement community, and this will be felt across our state," said Alabama Gov. Kay Ivey in a statement Friday.

At the end of November 2019, Lowndes County Sheriff John "Big John" Williams was shot and killed as he was reporting to a convenient store where a group was loitering in the parking lot. William Chase Johnson, the son of a law enforcement officer, was arrested and charged for the capital murder of the 62-year-old.

Monroe County Deputy Sheriff Julius Jamal Dailey lost control of his patrol car on June 11, 2019, and crashed. Dailey, 29, was responding to a burglary in progress, according to the Officer Down Memorial Page (ODMP) which tracks line-of-duty deaths of law enforcement officers.

Auburn police officer William Ray Buechner Jr. and two other officers responded to a domestic disturbance on May 19, 2019 when shots were fired from the residence. All three officers were shot, but Buechner died. Grady Wayne Wilkes was arrested the following day and charged with capital murder.

The year began with Alabama losing two officers within a seven-day period.

Mobile police officer Sean Paul Tuder was shot and killed while attempting to arrest 18-year-old Marco Perez on Jan. 20, 2019. Prosecutors filed a motion in October 2019 to seek the death penalty for Perez who is charged with capital murder.

Seven days prior to Tuder's death, Birmingham Sgt. WyTasha Lamar Carter was shot and killed during an attempted robbery. Michael Todd, 18, and Jeremy Owens, 31, were charged in connection with Carter's death. Owens is charged with capital murder.

In total, 113 law enforcement officers were killed while on duty across the country in 2019, according to ODMP. Only three states, all which much larger populations -- New York, Texas and California -- have had more deaths in the line of duty this year than Alabama.
Report a correction or typo
Related topics:
abc newsnational
Copyright © 2021 ABC News Internet Ventures.
More Videos
From CNN Newsource affiliates
TOP STORIES