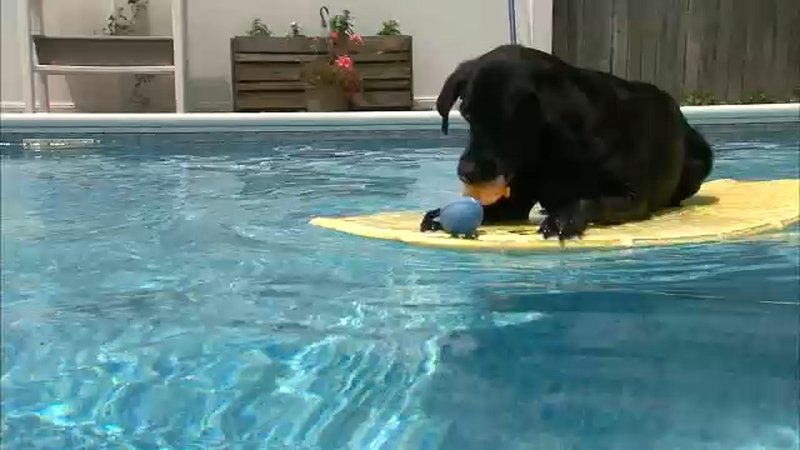 Turning your viral videos into cash

MANASQUAN, New Jersey (WABC) -- Making money off your social media posts isn't usually the motive for most of us who post. And it turns out you can make money off this stuff. But when it came time to get paid for her viral video, one New Jersey woman says all she got was static from the largest online retailer.

Abby the black lab is a boogie board balancing YouTube sensation. She went viral with this amazing aqua antics.

"One day she just jumped on the board and started moving it and she hasn't stopped in six years," Elizabeth Keenan said about the lab mix she rescued.

"They were going euthanize her," Keenan said.

Soon after being adopted she mastered maneuvering all four paws to traverse her Manasquan pool and retrieve her tennis balls.

"So I posted a video and it was picked up by a media company, sold to different countries," Keenan said.

The dog's dexterity started raking in the dough. Keenan says she's taken in thousands from her videos.

Then last year, the registered nurse thought she hit pay dirt when she saw her pup popped up on Amazon.

"I kept looking at Amazon. And the video was up. They're advertising around it commercials and I'm not seeing any revenue," Keenan said.

She contacted Rumble, an online clearinghouse for amateur and pro video which had given her royalties in the past. Keenan says she was told by Rumble it doesn't contract with Amazon.

Then she flagged Amazon for copyright infringement. She says this runaround went on for months so she contacted 7 On Your Side.

After we reached out to Rumble -- it revealed it made a mistake: it did syndicate Abby's video to Amazon.

But according to Amazon's dashboard, Abby's viral video only had just 74 views and 38 completed views. The total earnings on the video was roughly 35 cents (over two years). Rumble told Abby's owners her cut of the licensing fee was just 21 cents.

"You've been using it for 365 days. You've been advertising. And I haven't received any compensation for it," said the disgruntled dog owner.

Rumble said that paltry payday was determined by clicks and views that Amazon tracks. An Amazon rep said this mix-up was between Keenan and the video licensing company, Rumble, but apologized for the "substandard customers service" it gave her.

The big takeaway is, when selling video, be aware usage rates vary.

If your picture or video goes viral and someone want to license it, prices vary for social media vs. advertising.

So research copyrights carefully and get your licensing fees in writing.

If using the app, click here to send us a news tip
Report a correction or typo
Related topics:
pets & animalsmonmouth countynew jerseyviral videonew jersey newsdog7 on your side
Copyright © 2022 WABC-TV. All Rights Reserved.
7 ON YOUR SIDE
Tips winterize your home and keep gas, electric bills low
How to get reimbursed for at-home COVID tests
7 On Your Side: Tips for ordering your free at-home COVID tests
Woman wrongfully fined $259K for neighbor's violations in NYC
TOP STORIES
Winter Storm Update: Tracking the nor'easter
NY area urged to prepare for snow, wind as nor'easter approaches
Gov. Murphy declares state of emergency in NJ ahead of nor'easter
Final farewell for NYPD Officer Jason Rivera
Off-duty NYPD officer working security shoots man after stabbing
10 injured when bridge collapses in PA; human chain formed to help
Bidens welcome cat named Willow to White House
Show More
'Tiger King' Joe Exotic set for resentencing in Oklahoma
COVID Updates: Kids 5-11 need to be fully vaxxed for NYC indoor venues
Holocaust survivor, great-grandson educate next generation on TikTok
Parents livid after 9-year-old girl left locked outside school in cold
AccuWeather Alert: Nor'easter to bring heavy snow
More TOP STORIES News
Send us your questions, issues, and story ideas to Nina by filling out the form above, by emailing 7OnYourSideNina@abc.com, or contact Nina on her Facebook page or tweet her at Twitter @7OnYourSideNY! You can also call the 7 On Your Side Hotline at 917-260-7697.