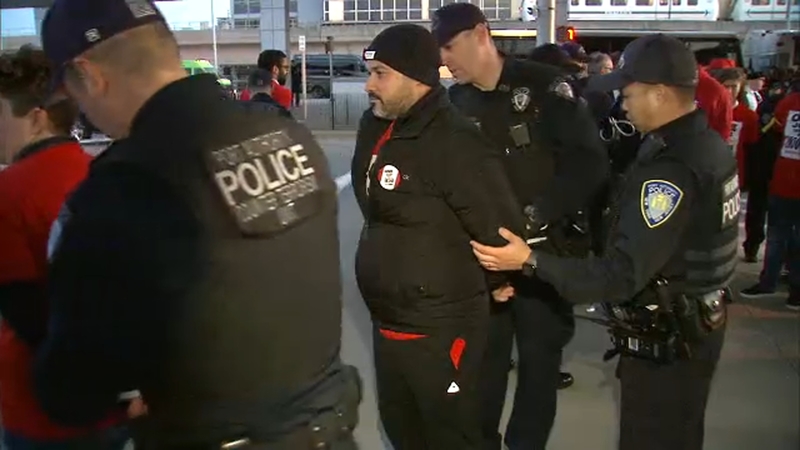 NEW YORK (WABC) -- On one of the busiest travel days of the year, there were demonstrations at American Airlines terminals around the country.

Airline food employees protested the low wages paid to catering workers, and hundreds of them staged a 'die-in' inside Terminal 8 at Kennedy Airport.

They then left the terminal and blocked a roadway for departures, where they were met by a large force of Port Authority police officers.

Over 500 demonstrators took part in the protest. 53 people were arrested for disorderly conduct. All were given a summons at the scene.

The Port Authority says there was no impact on airport operations.

"We are talking to the passengers," said one worker. "We need the passengers that American Airlines makes billions of dollars off of to understand our fight. They are in this with us."

Earlier the airline food workers from Local 100 and other supporters gathered outside the American terminal for a rally.

"We believe working people should come first," said the mayor. "We believe the people who create the wealth should share in the wealth."

The workers are calling on American Airlines to take steps to ensure that workers who cater its flights are able to escape poverty and afford medical care.

American Airlines released the following statement:
"We are confident that, with the ongoing assistance of federal mediators, the catering companies and Unite Here will negotiate new nationwide agreements that increase pay and benefits. We understand that new labor contracts between Unite Here and LSG Sky Chefs and Gate Gourmet will result in increased costs for their many airline customers, including American. We are not in a position to control the outcome of their negotiations or dictate what wages or benefits are agreed upon between the catering companies and their employees."