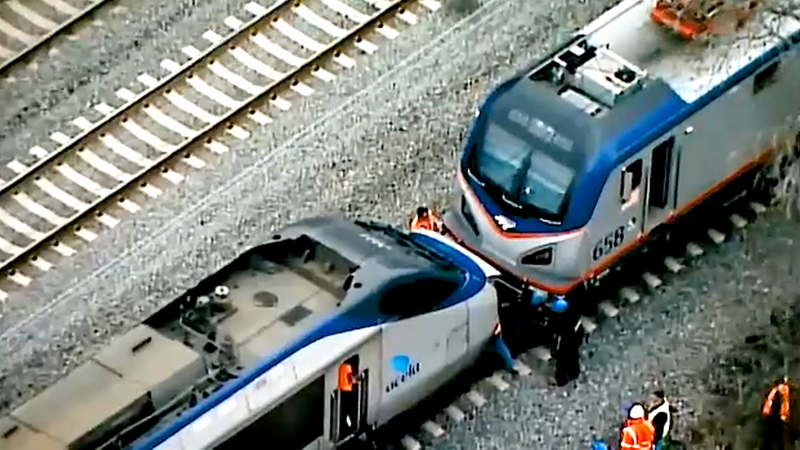 An Amtrak source said no one was injured, but passengers were shaken in what he called "a highly unusual mechanical event."

Amtrak train 2150 was approaching the Susquehanna River just before 6 a.m. when passengers felt a sudden jolt as the Acela's two locomotives and the first car separated from the three other passenger cars.

"I could feel, like, a jerk," passenger Andrew Exum said. "We were dragging something, and when I looked out the window, I saw a shower of sparks coming out of the train."

One source tells 7 On Your Side Investigates that a passenger train separating at a high rate of speed is "extremely rare" and "potentially dangerous," and that anyone walking from one car to the other could have fallen to his or her death.

The decoupling could indicate an Acela maintenance problem, according to former Amtrak conductor Michael Callanan.

"They have little down time, a lot of stress on those trains," he said. "Because the Acela has tilting, which allows it to tilt and maintain the high speed, which puts stress on what holds a train together."

"The train separated between the first class car (1st car) and the quiet car (2nd car). I was in the quiet car when it separated. Lots of sparks but the Amtrak personnel handled it well, I thought," he wrote.

Here’s a live shot from Amtrak 2150, where we’ve lost all power. pic.twitter.com/ekJZBhtZPe

In a statement, an Amtrak spokesman said, "There were no reported injuries to customers or crew...We are currently investigating the cause of the separation, inspecting every Acela trainset and taking any necessary actions to prevent a reoccurrence."

Amtrak tweeted that Acela 2150 was terminated due to "mechanical issues."

There's a heightened nervousness among Amtrak passengers following a recent string of deadly accidents, including a collision with a freight train Sunday in South Carolina that killed two. And the week before, there was a collision with a truck in West Virginia.

In Tuesday's incident, the Acela's emergency safety system immediately kicked in, automatically applying the brakes. Fifty-two passengers were transferred to another train at Wilmington Station and continued the trip to Penn Station.

"I'm probably like other commuters who wished we invested a little more in our infrastructure," Exum aid. "Specifically in that corridor, which is so important to American commerce."