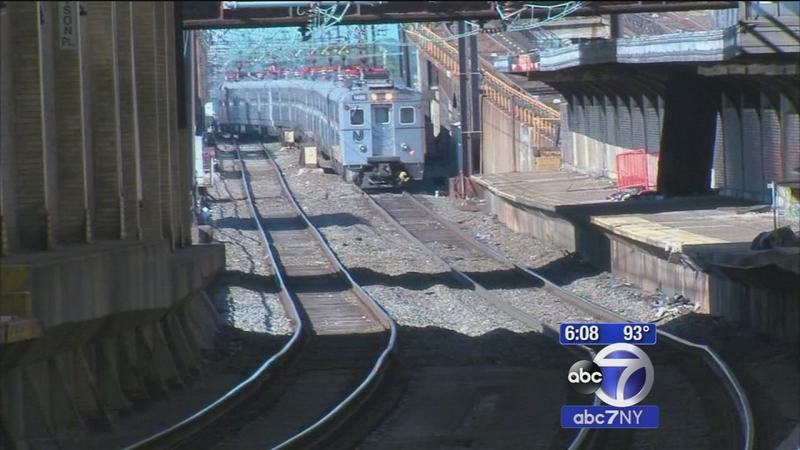 NEW YORK (WABC) -- It was another morning of delays on New Jersey Transit, the 5th time in the past 8 days.

An Amtrak train headed to New York Penn Station on Tuesday became disabled inside one of the Hudson River tunnels, causing some delays for NJTransit commuters.

Officials said 241 passengers were traveling on the Amtrak train. They never lost power or air conditioning, but people stuck on the train tweeted that they had been waiting for help to arrive for at least an hour.

Amtrak officials said the train was stuck in the tunnel for 1 hour 15 minutes. They responded to one tweeter who complained, saying a rescue engine was on the way.

@burnitoffnyc Information at this time is limited; rescue engine is on it's way; our apologies for the delay.

Shortly after 11:00 a.m., a rescue engine did pull the train into New York Penn Station.

NJ Transit trains were delayed about a half-hour at the height of the problem, but everyone was back to normal by noon.

Earlier in the morning, NJ Transit trains were delayed because of overhead power line problems. Tuesday's delays come on the heels of delays on four days last week caused by problems with electrical lines.

In the wake of the delays, federal Transportation Secretary Anthony Foxx sent a letter to Governors Chris Christie of New Jersey and Andrew Cuomo of New York urging them to meet with him in the next two weeks to put together a strategy for building new crossings under the Hudson River.

The patience of train passengers coming in from New Jersey is growing thin. This time it was an Amtrak train from Philadelphia breaking down in one of the railroad's 105-year old tunnels and stranding other trains.

"It's a shame. If we don't get more serious about getting our trains and tracks in order, it's going to slow down the economy," said train passenger Brian Selander.

The condition of the tunnel is a major threat to the region, Foxx said in the letter, saying "severe rail service interruptions provided yet another reminder of the need to replace the aging infrastructure that serves millions of passengers daily."

Governors Cuomo and Christie say they would like to meet with Foxx to discuss expanding tunnel capacity, with Gov. Christie adding, "so long as it is equitably funded by everyone who benefits regionally and not disproportionately on New Jersey taxpayers."

"There's a river around here somewhere with tunnels that were built in the late 1800's and they haven't been modernized since 1927," said Vice President Joe Biden.

The administration is helping Amtrak move forward with its Gateway Project, which would parallel the existing line and create two new tubes under the Hudson River and double train capacity.

It would then allow Amtrak to shut down the current tubes for critical repair work. "Everything needs to be rebuilt," said Amtrak President and CEO Joe Boardman. "It isn't just the cable, it's the hardware, it's the catenary hasn't been touched that's been up since the 1930's."