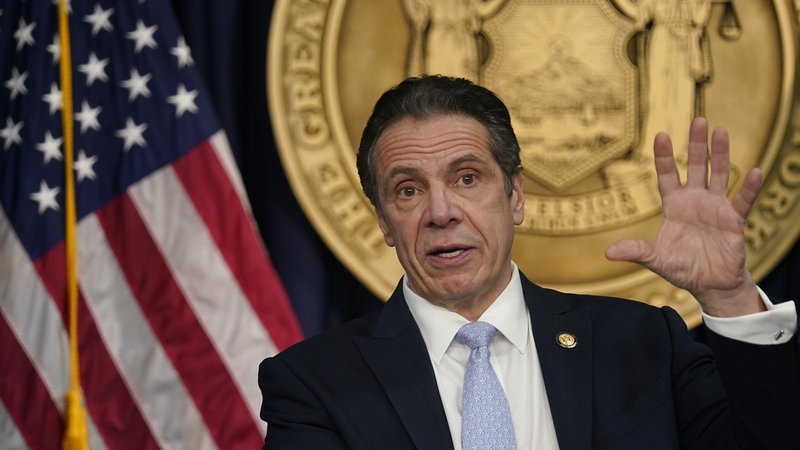 NEW YORK (WABC) -- Governor Andre Cuomo is forging ahead amid allegations of sexual harassment and inappropriate behavior, focused on COVID-19 and the vaccine rollout.

He is not talking about much else, perhaps -- his critics say -- in an attempt to divert attention from his controversies.

On Monday, he appeared with supporters while announcing that all those 50 and up will be eligible for vaccination starting Tuesday.

"You are saving lives," said the Rev. Franklyn Richardson, with Grace Baptist Church. "Thank God for your amazing leadership, and thank you."

Cuomo has it made it a point lately not to invite reporters to his events and to surround himself with only his biggest supporters.

"I have no question, and I have no hesitation, when asked to speak on behalf of the governor," Rev. Richardson said. "Because I know his works."

During his COVID teleconference later Monday, Cuomo warned reporters not to ask about other matters.

"Let's go to questions," he said. "As you know, there's an ongoing review by the assembly and the attorney general's office, and I'm not going to have any comment on that until the appropriate time."

Reporters complied, except for one from Politico, who asked about Congressman Tom Reed, an upstate Republican also accused of sexual harassment. He's apologized and promised not to run next year.

Some pundits have said if Cuomo would only do the same, he might catch a break. But Cuomo declined to address the Reed situation.

Over the weekend at a rally against Cuomo, his first accuser Lindsey Boylan, accused Cuomo of not focusing on COVID and instead trying to smear her reputation.

"The only way we can hold this governor accountable is to impeach him," she said. "The Assembly must act swiftly."

In addition to Boylan, seven other women have accused Cuomo of misconduct. But for now, he's not talking about that, instead only on talk about the pandemic and rebuilding.