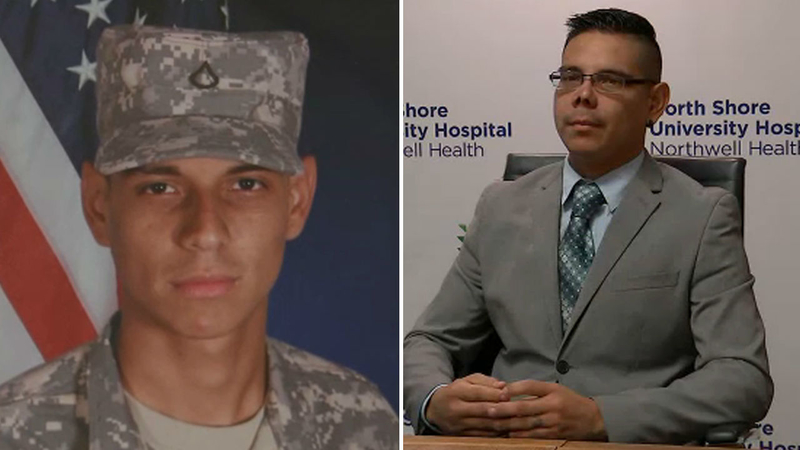 NASSAU COUNTY, Long Island (WABC) -- An Army veteran from Long island has regained the ability to sleep and breathe after his face was shattered in a road rage incident.

Luis Rios, 25, revealed his reconstructed nose on Friday and had a chance to publicly thank the doctor who helped give him his life back.

Rios returned home to Long Island in 2018 after six years of service in Afghanistan to help ease his family's financial burden. He was just beginning to readjust to civilian life when everything changed on July 28, 2019.

Rios was the passenger in his friend's car when they were driving home from work at 11:30 p.m. -- only two blocks away from his home.

When they were stopped at a stop sign, they noticed another car pulled in front of them and cut them off. Words were exchanged and the last thing Rios says he remembers is a man approaching his side of the car.

Rios was struck four times in the middle of his face with a crowbar and his nose became detached from his face. He said he remembers thinking he was going to die.

His friend rushed him to the hospital where doctors repaired the soft tissue, but he was still left with no supportive structure to his nose and could not breathe, sleep or smell.

Since then, Dr. James Bradley at Northwell Health agreed to perform Rios' surgeries for free since he had no insurance.

Rios had the first surgery on Sept. 3 and underwent a full nasal reconstruction with soft tissue taken from his ribs. The second surgery on Oct. 8 helped to further improve the appearance of his nose.

"I can smell again, sleep again, and I'm very grateful to Northwell and everything they've done for me," Rios said. "Before I haven't really taken the time that I should in helping out people, but yes I will definitely take the time to -- if we're all here to help each other out, it makes life that much easier."