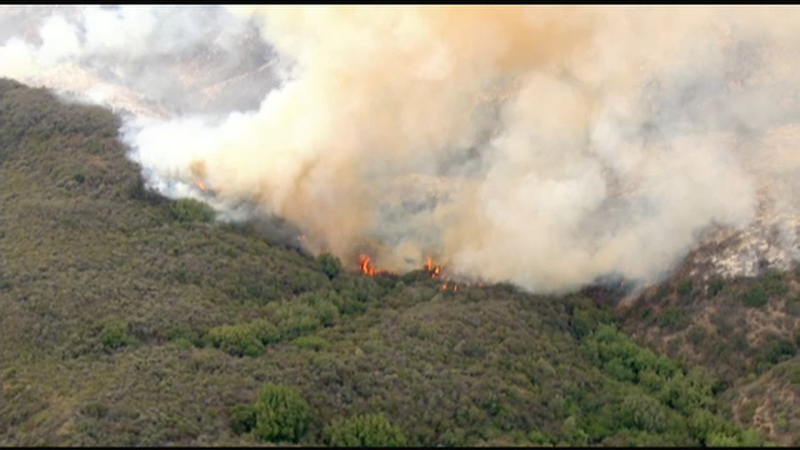 PACIFIC PALISADES, Calif. -- A person who was detained Sunday in connection with the 1,325-acre brush fire in Pacific Palisades has been arrested, officials said Monday.

Los Angeles Mayor Eric Garcetti made the announcement of the arrest during a press conference Monday.

Los Angeles Fire Chief Ralph Terrazas said the suspect was being treated for smoke inhalation. Additional information about the suspect, including his identity and age, was not immediately released. An investigation is ongoing.

The arrest comes after Los Angeles Fire Department arson investigators and Los Angeles police detained and released another person over the weekend.

Smoke from wildfires could cause health problems for some people.

"Regarding the cause, it is labeled suspicious,'' Terrazas said. "The LAFD Arson Counterterrorism Section, along with LAPD, have aggressively pursued all tips and all leads. I want to have a special thank you to the community that provided us those tips and leads. We have to work together as a community. This problem is so significant in terms of major brush fires."

There was zero containment of the Palisades Fire as of Monday morning, Garcetti said. An update on the acreage of the blaze -- which prompted an evacuation order for about 1,000 residents -- was expected Monday afternoon, according to the mayor.

"While ... it's zero containment, that doesn't mean 100% out of control,'' Garcetti said. "We're holding lines ... There's no injuries reported, no structures under threat at this time. Evacuation orders of course have been issued on the county side, but no evacuation orders have been ordered in the city of Los Angeles.''

As of Monday morning, no structures were damaged. A firefighter sustained a minor eye injury but was expected to be OK, according to Garcetti.

If there's time, here is a list of essentials to take with you during a wildfire evacuation. Above all else, follow instructions given and get out of harm's way.

"We're trying to keep it up out of the old growth, which is 50-60 years that hasn't burned," Ortiz said Sunday. "So there's a lot of dense, thick material there -- oily plants that have died out because of the drought. So that's our objective today is to try to keep it out of that and protect the communities and neighborhoods to the west of this fire because that's what's closest to it."

Crews responded to a remote area off Michael Lane and Palisades Court around 10 p.m. Friday as the fire grew to approximately 15 acres, according to the Los Angeles Fire Department.

The fight continued overnight, but by 4 p.m. Saturday, firefighters were dealing with a significant flare-up that quickly got out of hand, creating a large plume of smoke visible across Los Angeles County.
Around 7 p.m. Saturday, mandatory evacuation orders were issued for about 1,000 residents in Zone 4 and 6 in the Topanga area, according to the LAFD. That includes residents east of Topanga Canyon between the Community and View Ridge, and everyone north of Entrada, south of Oakwood and east of Henry Ridge.

What's that red stuff they drop during a wildfire? Here's what to know about flame retardant.

It is unclear if all of the residents in the fire zone had evacuated as of Sunday morning. Ortiz said the fire was not immediately threatening homes in Zone 4 or 6, but the evacuation order was made in case additional resources need to be quickly deployed.

An evacuation center for large animals was established at Pierce College at 6201 Winnetka Avenue. Small animals can be taken to an L.A. County animal shelter at 29525 Agoura Road.

Over 300 firefighters have responded to the area, with water-dropping helicopters working to contain the flames as the steep terrain made it difficult to attack from the ground.