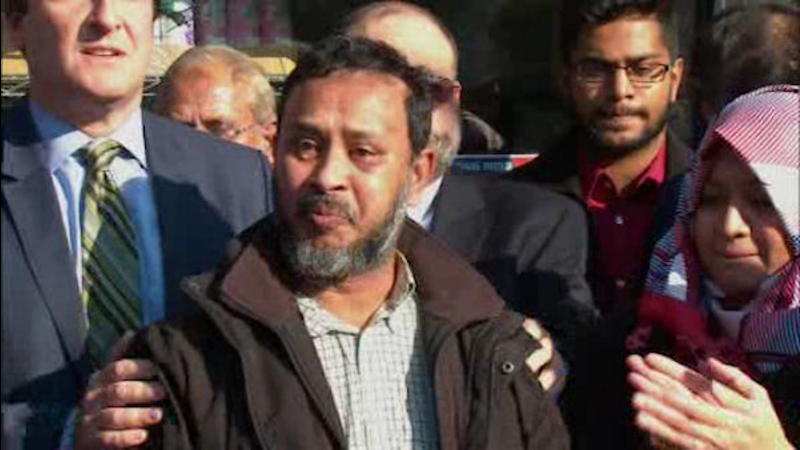 Queens store owner says he was victim of hate crime

ASTORIA, Queens (WABC) -- A community in Queens is standing behind a store owner who says he was the victim of a hate crime.

"I don't expect you guys behind me, so, I'm so happy," said Sarker Haque, the assault victim.

Clearly overwhelmed by this showing of support, Muslim store owner Haque spoke about the attack Saturday at his shop in Astoria, which left him fearing for his life.

"He punched me to here. So, I was like falling down on the side. I said, 'What's going on, what are you doing here? So then, he said, 'I kill Muslim,'" Haque said.

"I kill Muslims," were the words his attacker allegedly said after Haque says, the attacker looked at a newspaper cover in his shop with the photo of San Bernardino terrorist Tashfeen Malik, on the cover.
Haque still has a black eye, and this community, known for its diversity is trying hard to work through its bruised spirit.

"Because this is his neighborhood, this is his community, as much as everyone else's," said Costas Constantinides, New York City Council (D-Astoria).

It was thanks to Good Samaritans that police caught Haque's attacker. Now they're investigating it as a possible hate crime.

Thursday, Muslim and community leaders urged others not to be afraid to speak out.

"Because if it gets much worse, then the people will have much worse incidents on their hands than the ones we're dealing with right now," said Sen. Michael Gianaris, (D) Astoria.

The pain is so strong in a place Mr. Haque never thought he'd live in fear.

"This is my community. I was in this country when I was 21 years old," Haque said.

Piro Kolvani, 55, of Jacksonville, Fla., was issued a desk appearance ticket for assault and criminal mischief charges on Thursday.