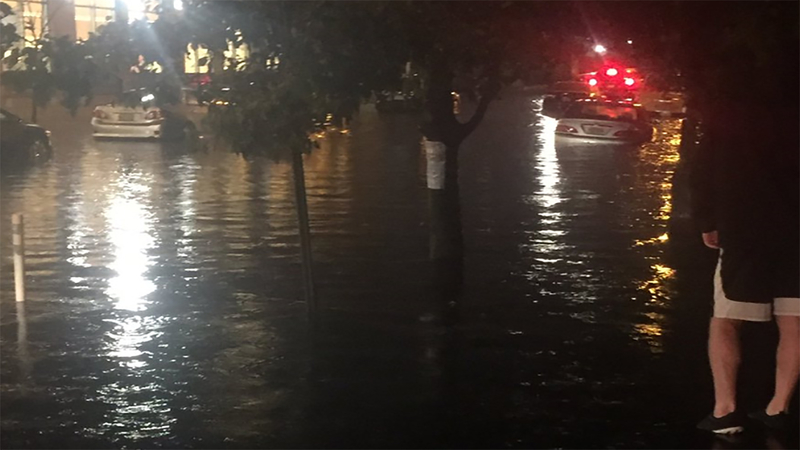 NEW YORK (WABC) -- A round of severe storms brought torrential downpours and gusty winds to the Tri-State area Wednesday night, causing flooding, downed trees, and at least one fatality.

Rainfall totals of 2 to 3 inches were reported in some spots, as the remnants of Hurricane Barry moved into the region.

In Connecticut, authorities say a man was killed when a tree limb fell on his car following a lightning strike.

Authorities say a man was killed when a tree limb fell on his car in Connecticut during Wednesday night's severe storms. Anthony Johnson reports on the severe storm damage in Hills

Fairfield police received a report at 5:16 p.m. of a large tree limb landing on a vehicle on Park Avenue. Responding officers found 21-year-old Jarrod Marotto, of Southington, unconscious and unresponsive in the driver's seat.

Firefighters had to wait for an electrical crew to shut down power to the wires before freeing Marotto. He was the only occupant of the vehicle, and he was pronounced dead at St. Vincent's Medical Center.

In New Jersey, there was widespread flooding in the streets of Hoboken, with water up to car bumpers on some streets in areas that often see flooding when there is heavy rain.

#flooding in Hoboken this never gets old 😂😂 pic.twitter.com/eZAxVJFSHg

Thousands were left without power in North Jersey. In Hillsdale, a utility pole was damaged and could be seen leaning into the street on Everdell Avenue.

PSE&G equipment propped up the pole so that it wouldn't fall over, and police closed off the area to traffic.

Flooding was also reported on the tracks at the Court Square subway station in Long Island City.

In Manhattan, one person was injured when a tree fell on a car on West 46th Street.

The storm also left more than 1,000 customers without power in the Bronx.