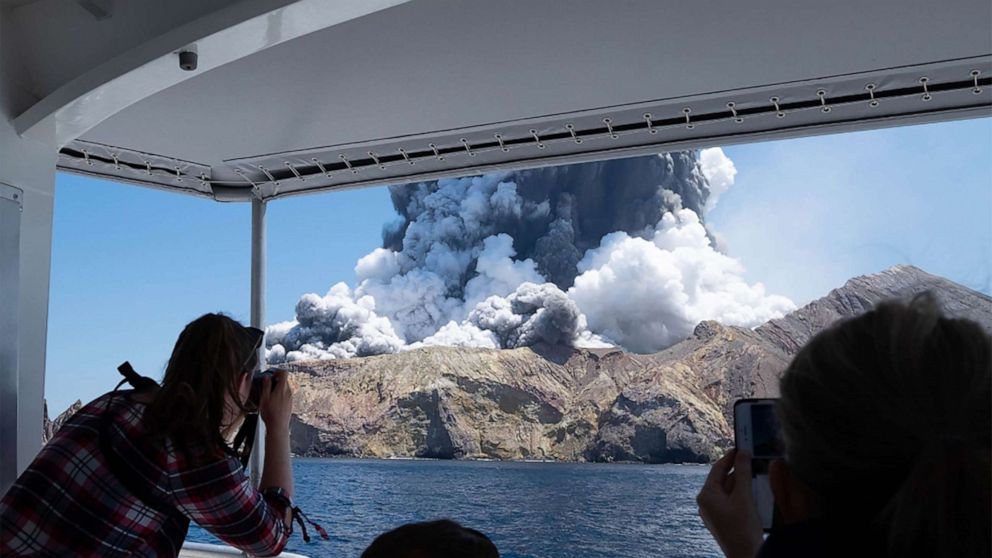 ABCNews
By MORGAN WINSOR
LONDON -- At least five people were killed and eight more are feared dead after a volcano erupted several times on a small island in New Zealand on Monday, officials said.

Officials initially feared that as many as 100 people were on the ground or in the vicinity of the eruption but have since lowered that number to 47, Ardern said.

Thirty-four people were rescued from the island via helicopters, New Zealand officials said. Three people have been released from hospitals in Wellington and 31 people remain with "a number in critical condition," Ardern said. Of the injured, 27 have burns over at least 30% of their bodies, officials said.

Nine Americans were on the island at the time of the eruption, officials said.

The eight people who are still unaccounted for are feared dead, officials said.

"We can never say 100%, but I would strongly suggest that there is no one that has survived on the island," New Zealand Police Deputy Commissioner John Tims said Tuesday.

On Tuesday afternoon local time, officials said they would be launching a criminal investigation into the circumstances surrounding those who died on the island.

Among the victims were New Zealand residents as well as tourists from the U.S., U.K., Australia, China and Malaysia, Ardern said. A total of 11 Australian nationals are unaccounted for, but those victims could be included in the current death toll, said Australian Prime Minister Scott Morrison.

The High Commission of Malaysia in New Zealand confirmed at least one dead was from the nation.

"No signs of life have been seen at any point" as aerial reconnaissance flights continue over the island, Ardern said.

The site, which is covered in ash, is too dangerous for first responders to go on the island. There is about half a meter of ash on the island, Ardern said, describing it as "significant."

"It is unsafe for us to go onto that island," New Zealand Police Deputy Commissioner John Tims said. "I've got to also consider the safety of our people and emergency services staff."

A 5-mile no-fly zone is in place around White Island, along with a 5-nautical-mile maritime exclusion zone, Turner said in a press release.

"We have been advised that the situation on Whakaari / White Island remains extremely volatile," Turner said. "There have been three eruptions and there is unpredictable ongoing volcanic activity. The current risk of ash fall reaching the East Coast [of mainland New Zealand] is low to very low."

New Zealand police are in "constant contact" with the country's geoscience agency regarding the level of risk of a further eruption, according to Turner.

White Island, located 30 miles offshore from mainland New Zealand, has had regular eruptions for years and remains uninhabited, but is still a popular tourist destination. The island is accessible only by boat and helicopter.

Authorities are working to confirm the exact number of those who have died in addition to the five deaths reported. Those five people had been rescued from the island earlier in the day and succumbed to their injuries, according to Tims, who couldn't confirm their nationalities.

Some 30 passengers from the Ovation of the Seas cruise ship were among those visiting White Island at the time of the eruption, according to New Zealand Cruise Association CEO Kevin O'Sullivan.

"Our hope is that everyone will be recovered quickly and unharmed, but at this time we have no further information," O'Sullivan said in a statement Monday.

Those who cannot get in touch with a friend or family member in the wake of the volcanic eruption are urged to register them by visiting the New Zealand Red Cross website or call the New Zealand Police.

The U.S. Department of State is aware that U.S. citizens were affected by the volcano eruption, a spokesperson said in a statement to ABC News.

"We are providing all appropriate consular assistance and are in close communication with local authorities who are conducting search and rescue operations," the spokesperson said. "The Department extends our sincerest condolences to the families of those lost. Out of consideration for those involved, we have no further information at this time."