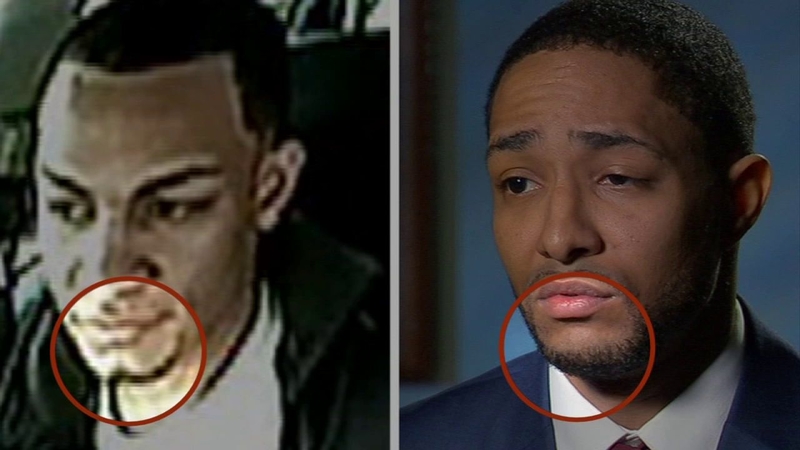 NEW YORK (WABC) -- In an Eyewitness News Investigators exclusive, a man was arrested for illegally selling guns to an undercover ATF agent.

But now the suspect says ATF got the wrong guy and the video seems to back his claim.

So, how could this happen?

He faces 15 years behind bars for gun trafficking, but video of an undercover federal sting that led to his arrest is raising serious questions about whether they charged the wrong guy.

In the video, the differences are striking.

Exclusive undercover video shows an illegal gun dealer in May 2013 selling a 9mm pistol to an undercover ATF agent for $800.

Gun Dealer: "Yo, I got more alright."

ATF and the Queens District Attorney say Wellington Clase is the gun dealer seen in the video.

He was arrested last August along with seven others following a joint ATF-NYPD undercover operation.

"It was devastating, I was confused, didn't know what to think," Clase said.

Wellington Clase says the ATF got the wrong guy and their own video proves it.

"My nose, mouth, eyes, we have different, I was born with congenital ptosis, a condition in my eye," Clase said.

Clase has a criminal past that includes robbery and weapons possession. He had put that all behind him, graduated from electrical school and was working when he was arrested.

The undercover video seems to back up his claim they charged the wrong man. The guy selling the gun to the undercover ATF agent has model-like features.

Clase's distinctive droopy eye is a medical condition he's had since birth.

"The video concretely proves that Mr. Wellington Clase is not the one that's selling the gun," said Manny Gomez, a private investigator.

The private investigator for the Clase family was stunned when he finally obtained the undercover video.

"This ATF agent didn't do his job and neither did the NYPD. They had this video from the beginning," Gomez said. "They could've compared his mugshot photo with the video and they did not."
Gomez says the ATF bungled the case at every turn, waiting more than two years after this illegal undercover buy went down to make an arrest, and never getting prints or DNA off the gun.

"They dropped the ball on every aspect of this investigation and locked up an innocent man. That is appalling," Gomez said.

Clase spent seven months at Rikers before his family spent their life-savings to bail him out.

His trial keeps being delayed putting his life on hold as he faces gun charges that could send him to prison for 15 years.

"My life was actually evolving as me growing up as a young man. I just finished school, had a son. So those are stages of my life that I missed out on because of a false arrest," Clase said.

An ATF spokesman says they aren't going to comment on a current court case but added that they made the arrest after multiple sources identified the suspect.