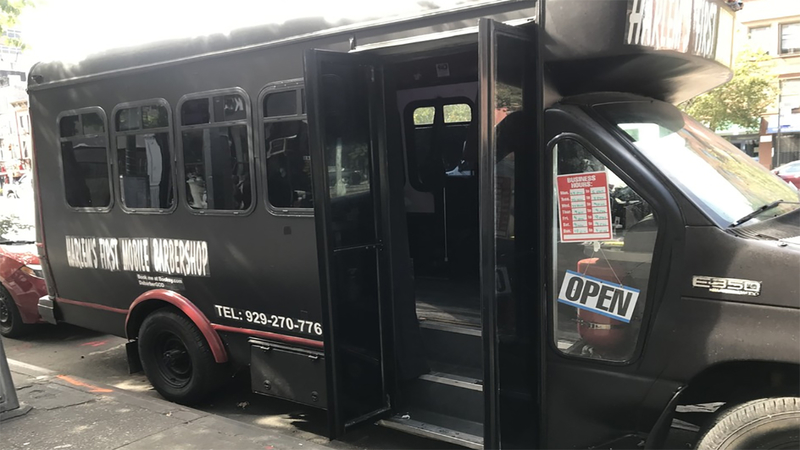 HARLEM, Manhattan (WABC) -- With rent for stores skyrocketing in New York City, a man in Harlem found a unique solution to keep his barber shop running.

He put it on wheels.

Linwood Dillard is changing the game when it comes to barbers.

The 36-year-old turned a Ford E-350 into Harlem's first mobile barber shop, possibly the first in the city.

Linwood says he never dreamed of being a barber but when he was about 13 years old and used a razor blade to cut his own hair, things went terribly wrong.

His father bought him a set of clippers so he wouldn't make the same mistake.

Dillard practiced on friends but admits he wasn't very good. In mid-2000, he served one year in prison for selling drugs.

When he got out, he was having trouble finding a job. It was then that he picked up those clippers and started cutting hair again.

Over the next few years he bounced from one shop to another and eventually moved to Atlanta, where he perfected his skills.

In 2011 he came back to New York City. He started working at a shop in the same neighborhood where he grew up, near Lenox Avenue and 128th Street.

When the owner died, Linwood and a friend took over and were very successful. But as the neighborhood changed, so did the rent, jumping from $3500 a month to $8500. The shop closed.

Soon after, Linwood felt defeated but had a lightbulb moment after spotting an Access-A-Ride bus.

He bought an old bus for $2500 that was being used for dog grooming. He fixed it up and now spends seven days a week cutting hair on the bus.

He hopes to grow his business and regularly gives back to the community with free haircuts to the homeless and for kids at the beginning of the school year. and is planning a big event for the holidays.