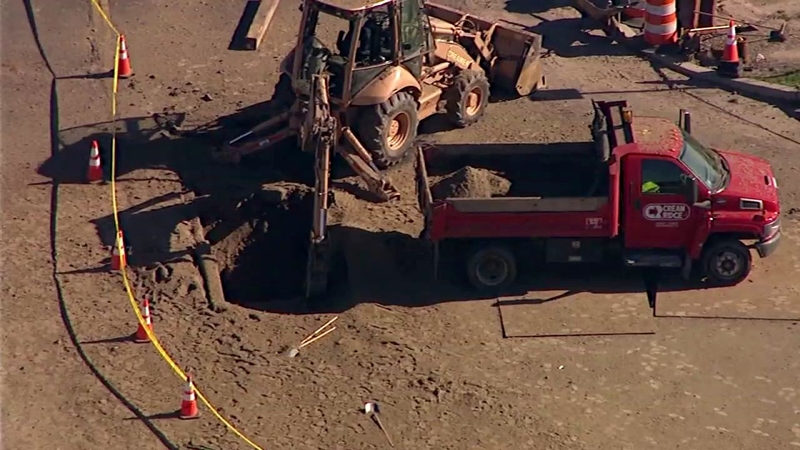 Contractors from the Cream Ridge Construction company in Hackensack were installing a new gas line for PSE&G at the time, police said.

The new gas line was being tested with pressurized air when the line failed, causing the explosion. No gas was in the line at the time. "This was concussive type explosion with pressurized air that was in that line at the time," said Bayonne Deputy Police Chief Peter Nevins. "That pressurized air was released and expelled all the air from that construction hole."

Nevins said the blast was atually a temporary cap that blew off under too much air pressure. He said those kinds of caps are replaced with permanent ones that are welded onto the line before gas is pumped in.

Two of the injured contractors were taken to Jersey City Medical Center with serious injuries; one is critical and the other is stable, but under close observation. A third was taken to the Bayonne Medical Center for minor injuries.

Two Bayonne officers, who were handling traffic at the site at the time of the explosion, were treated at the Bayonne Medical Center as a precaution.

Here's a look at one of their police vehicles, covered in debris:

PSE&G confirmed in a statement that the "contractors were testing the main with air, which is standard practice, when the incident occurred. There was no natural gas flowing through the main at the time of the incident and the cause is under investigation."

A spokesperson for the U.S. Department of Labor said OSHA is investigating.