Engineer believes Berkeley balcony collapse was due to dry rot 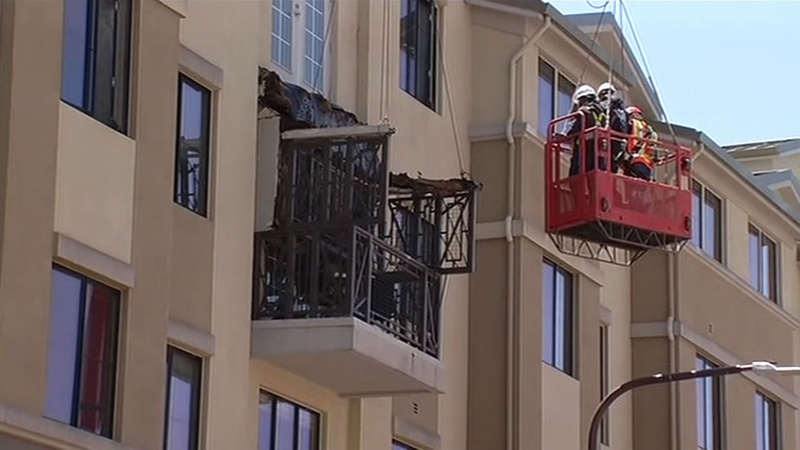 Engineer believes Berkeley balcony collapse was due to dry rot

BERKELEY, Calif. -- The overriding question on Tuesday is how in the world Monday night's tragic balcony collapse could happen given current building codes, inspections and all of the other protections that are supposed to be in place.

Berkeley building inspectors have been on the scene from the moment they heard about the tragedy, trying to protect other residents who could be in danger and trying to figure out what happened.


To get to the bottom of this, the ABC7 News I-Team placed several public records requests for police reports, inspection documents and more.

Berkeley officials say it will be days or perhaps weeks before we see that information, but one long-time engineer says he knows exactly what happened and why.

Gene St. Onge has been a civil structural engineer for 37 years and he says it's clear what happened.

"The main, if not the only, cause of the problem is dry rot of the material, which is caused by water intrusion," he said.

READ MORE: A look at past US accidents involving balcony collapses

St. Onge said when a deck gives way due to dry rot, it doesn't just snap and fall - it bends before the break.

"This kept rotating like this, until the stress was too much and then it just seemed to flip," St. Onge said.

That explains why the balcony landed upside down on the deck below, throwing the victims onto the sidewalk and street.


At the news conference on Tuesday, building officials revealed that the project fell under the 1998 guidelines of 60 pounds per square-foot.

St. Onge said this deck should have easily held all those young people at the party.

"I considered 14 people at an average of about 150 pounds. That came out to a little over 40 pounds per square-foot, which is well within the design load for which they should have been designed at the time," he said.

Dry rot was also responsible for a deck collapse in San Francisco during a cocktail party in February 1996. One woman lost her life and 14 others were injured.

The I-Team is hoping to speak with the construction company about their work. This building is not very old, finished just eight years ago.

The families of the bereaved in the tragedy in #Berkeley earlier today have now all been contacted @CharlieFlanagan pic.twitter.com/uAda0EN9Z6

#BerkeleyCollapse: Spoke with man who lives in building. Says his apartment shook when balcony fell. Thought it was an earthquake. #mapit

#BalconyCollapse: Spoke with man who lives in building. Says his apartment shook when balcony fell. Thought it was an earthquake. #mapit

Irish students involved in #BerkeleyBalconyCollapse had orientation. They went over "staying safe over the Summer." pic.twitter.com/2xx3MrqHNZ

A crane is now in place- looks like they will soon make first attempts to get near the Berkeley Balcony that fell. pic.twitter.com/rpCaO1BuHE

#Berkeley: You can see where balcony ripped out of wall of 4th floor. Now resting upside down on 3rd floor balcony. pic.twitter.com/ZHXd4RMwgE

Andrea Gainford of Wexford heard the sirens following balcony collapse. Then texts came in from family in Ireland. pic.twitter.com/HSg2W5SLHG

Memorial where 6 people died overnight after a balcony in Berkeley collapsed. Victims were celebrating a 21st b-day. pic.twitter.com/bSEuVqvuOj