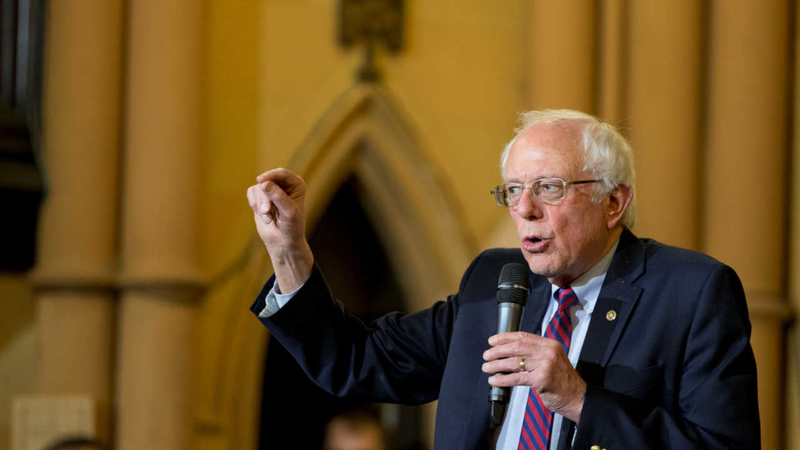 NEW YORK (WABC) -- With the New York Primary right around the corner on Tuesday, the Democratic candidates geared up this weekend. Hillary Clinton went to the West Coast, while Bernie Sanders flew all the way to the Vatican for a brief greeting with Pope Francis. Sanders got back in time for an event Saturday night at a church in Brooklyn Heights.

Senator Sanders spoke of justice and race and inequality.

"Where are was as a society when a kid gets picked up for marijuana and will have a criminal record for life, and others destroy the economy and nothing happens to them?", Sanders said.

You can watch the full interview with Hillary Clinton on the special hour-long episode of "Up Close" Sunday morning at 11 a.m. on Channel 7.

Sanders raced back to First Unitarian Congregational Society in Brooklyn Heights on Saturday after a whirlwind trip to the Vatican where he got to greet Pope Francis. Pope Francis, though, made it quite clear he was simply being courteous, and was not endorsing the candidate.

Meanwhile Hillary Clinton detoured Saturday from a weekend of big-dollar fundraising in California to pitch her plans to raise the federal minimum wage and refresh her criticism of rival Bernie Sanders in advance of Tuesday's New York primary.

The former first lady told a cheering crowd at a Los Angeles rally Saturday afternoon that if elected, she would push Congress to lift the $7.25-an-hour federal base wage.

"People end up in poverty. We need a living wage," she told the audience at Southwest Los Angeles College. She credited California for recently enacting the nation's highest statewide minimum wage - $15 an hour by 2022.

The focus of Clinton's swing through California was a pair of big-ticket fundraisers with actor George Clooney, with some donors agreeing to raise or donate six-figure sums.

In response, Sanders' campaign is running an ad in California contrasting his average donation - $27 - with Clinton's fundraising. Clinton has been more reliant on traditional fundraising, while Sanders has raised the bulk of his money online.

Facing a string of competitive contests with Sanders, Clinton depicted the Vermont senator as favoring the gun lobby over crime victims, while saying she would push for stronger background checks for gun buyers.

Clinton faces a tough test with Sanders in California, where an independent Field Poll released this month found Clinton with a 6-percentage-point lead, with 12 percent of voters still undecided.