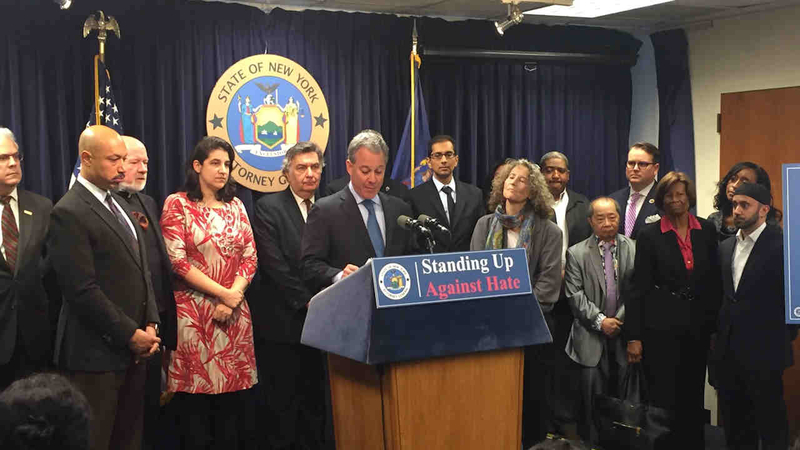 ALBANY, New York (WABC) -- The state attorney general on Thursday reassured New Yorkers that they are protected, despite a recent wave of hate or bias attacks.

"As the state's top law enforcement officer, let me assure anyone who is feeling scared or threatened at this time that this office stands behind you and has your back," said Eric Schneiderman. "New York's diversity is our greatest strength, and we will not allow anyone to turn that strength against us."

He was joined by two dozen religious, social and civil representatives in standing up against hate.

"This year's presidential election has laid bare some deep divisions in our nation," said Schneiderman. "The depth of those divisions and the ugliness of the rhetoric during the campaign surprised and even frightened many New Yorkers, and sadly in recent days we have seen a surge in bias attacks and hate crimes across the nation, including some right here in New York."

That uptick is noticed in New York City, where NYPD officials reveal so far this year there have been 328 overall hate crimes, compared to 250 last year, a 31 percent increase.

And there are 111 Jewish hate crimes reported this year, 102 last year, a 9 percent increase.

Two new incidents are under investigation, including a swastika spray painted on a sidewalk in Crown Hights.

The mayor later tweeted, "Acts of violence in our beautifully diverse city will not be tolerated. We are all better than this."

In another incident, swastikas were drawn on the doors of four dorm rooms at the New School.

Schneiderman promised that his office would protect, and defend the constitutional and civil rights of all New Yorkers.

The FBI reported Monday that hate crimes against Muslims in the U.S. rose to their highest number since the 9/11 attacks in 2015.

After the California shootings, Republican President-elect Donald Trump called for a moratorium on Muslims entering the U.S.

Schneiderman is a Trump foe. His civil fraud lawsuit lawsuit against Trump University is pending.