Deliveryman on bicycle 'doored,' then gets summons while lying on Manhattan street 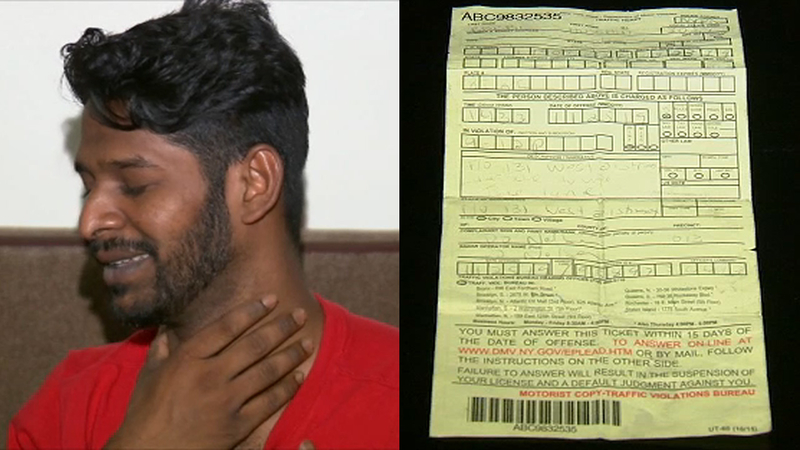 Cyclist 'doored,' then gets summons while lying on NYC street

CHELSEA, Manhattan (WABC) -- A Domino's delivery man whose bicycle collided with an open car door on a Manhattan street and was told by a responding officer while he was lying on the ground to expect a summons will not face any violations, the NYPD said Wednesday.

Video that was obtained by The Gothamist showed Hhossain Rabbi cross from one side of the street to the other before slamming into the door in Chelsea Monday.

He remained on the ground as passersby rushed to his aid, and another video showed an NYPD officer asking him if he was riding in the bike lane and then informing him he would be getting a summons.

Rabbi is thankful he's OK, but he's still in a lot of pain.

"Like around my neck, over here, my back pain," he said. "Too much back pain."

The 20-year-old had just finished making a delivery and was returning to the eatery when he veered from the bike lane on 21st Street in order to make a right turn, and that's when the door opened.

Rabbi claims the driver saw him coming down the street.

He says it wasn't until he got to Bellevue Hospital -- where doctors treated him for a concussion, leg pain and bruised arms -- that he reached into his pocket and found the summons.

"I just see the pocket, what happened?" he said. "I don't know, because I got accident they gave me ticket."

The NYPD said Wednesday that summonses should not have been issued to either the bicyclist or the driver because an officer needs to personally witness the incident to issue a summons.

"In this instance, the NYPD is voiding the summons issued on Monday, November 25, to the bicyclist in the 13th Precinct," the NYPD said in a statement. "It appears that the bicyclist was riding outside the designated bicycle lane when he was struck by the car door. However, in accordance with NYPD guidelines and policies, an on-duty, uniformed officer working in his geographic assignment must personally witness a violation in order to issue a summons, even when video of the incident exists. In this case, no officer personally witnessed the incident. The video appears to show the motorist also in violation of state vehicle and traffic law but was not summonsed for the above reason."