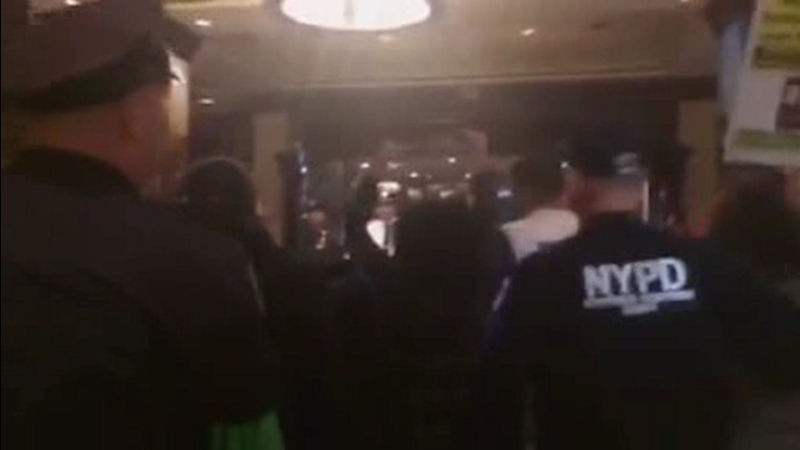 NEW YORK (WABC) -- There was some trouble for New York City Mayor Bill de Blasio Thursday night, and it happened at what the mayor hoped would be a joyous kickoff for his reelection campaign.

But do New Yorkers really want him re-elected?

Some of those greeting the mayor's re-election kickoff were uninvited. Cell phone video was sent out by a group of protesters, showing a handful of people with various grievances trying to make their way into the fundraiser. But, they only got about as far as the lobby.

"We're her to make sure that he understands that the communities are upset and they're angry that they haven't seen the change that they wanted to see and we want to make sure we unmask him for all of New York City," said Josmar Trujillo, a protester.

"How was it?" Eyewitness News asked.

The mayor didn't say much after the fundraiser.

A poll out Thursday showed the mayor could have an uphill climb if he hopes to win a second term.

The Quinnipiac University poll showed just 45% of likely voters approve of the mayor's job in his first two years, and 46% disapprove.

The poll shows 42% think he deserves reelection, while 48% do not, of course the rest are undecided and there's a lot of time before the election.

None of the protesters though were undecided.

"The mayor is a 'fauxgressive' and he's betrayed his base and so many of the people that voted for him. We want to come out here and talk to him about some of the policies that he's been pushing on our communities that are no different from what Michael Bloomberg or even Rudy Giuliani pushed," Trujillo said.