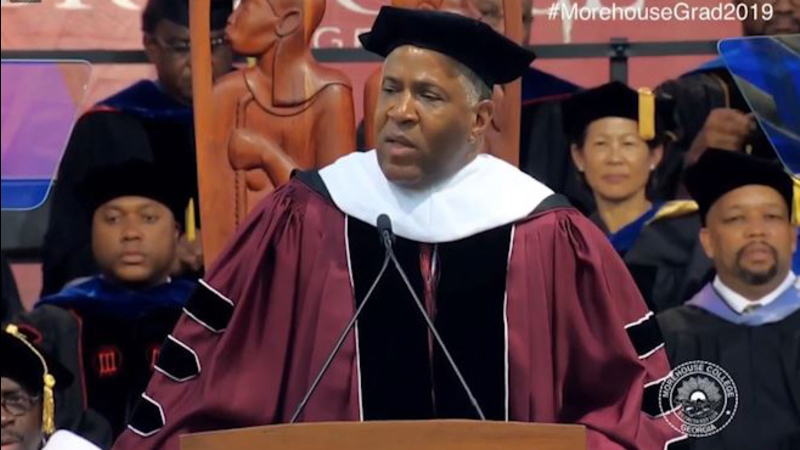 ATLANTA, Georgia -- Billionaire Robert F. Smith was the graduation keynote speaker at Morehouse College, but he left the students with more than words of wisdom.

The philanthropist and investor announced Sunday morning that he was going to eliminate all of their student loan debt.

"My family is going to create a grant to eliminate your student loans," Smith said to the graduating seniors. "You great Morehouse men are bound only by the limits of your own conviction and creativity."

"My family is going to create a grant to eliminate your student loans!" -Robert F. Smith told the graduating Class of 2019 @RFS_Vista #MorehouseGrad2019 pic.twitter.com/etG8JhVA46

Morehouse officials say the gift was worth about $40 million. He had previously announced a $1.5 million gift to the school.

"This is my class," he said, "and I know my class will pay this forward."

The announcement elicited the biggest cheers of the morning

Smith, a graduate of Cornell University and Columbia Business School, received an honorary degree from Morehouse on Sunday.

Smith founded Vista Equity Partners in 2000 and has since built that firm into a billion-dollar enterprise, investing in technology and software around the world. The firm manages commitments of more than $46 billion and oversees a portfolio of more than 50 software companies globally.

Smith is the largest private donor to the National Museum of African American History and Culture in Washington.

He was also the first and only African American business leader to sign "The Giving Pledge," an initiative created by Bill and Melinda Gates, and Warren Buffett, in which wealthy individuals pledge to give more than one-half of their wealth to causes such as poverty alleviation, disaster relief and global health and education.