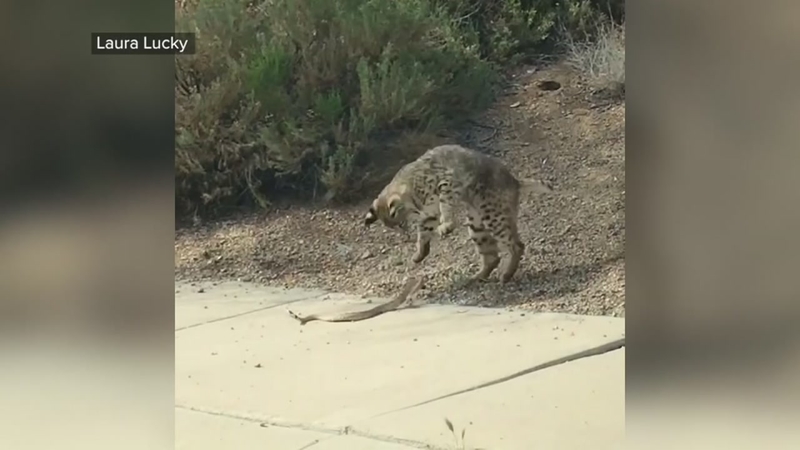 Bobcat faces off with snake

SCOTTSDALE, Arizona -- You probably wouldn't want to get caught in the middle of this showdown.

A bobcat and a snake fought it out on an Arizona sidewalk, putting on a show for the real estate agent who caught the whole thing on camera.

"I slam on the brakes, and I realize there's a rattlesnake right in front of him and he's almost toying with it, almost like playing with it," real estate agent Laura Lucky told KNXV.

The rattlesnake got in a couple of shots, but the fast-acting cat prevailed, grabbing the snake and carrying it away in its mouth.

Lucky was showing homes to out-of-state clients in North Scottsdale when it happened.

"I was telling my clients, don't expect this," she said. "Please don't be worried, because I swear, bobcats are harmless. And rattlesnakes you just stay away from and they won't bother you."

Animal experts say bobcats are not immune to rattler venom. If the cat was bitten, it would have been in a lot of pain.

However, it's normal behavior for bobcats to take on snakes, even if they're venomous.

No word if Lucky's clients were sold on the neighborhood.