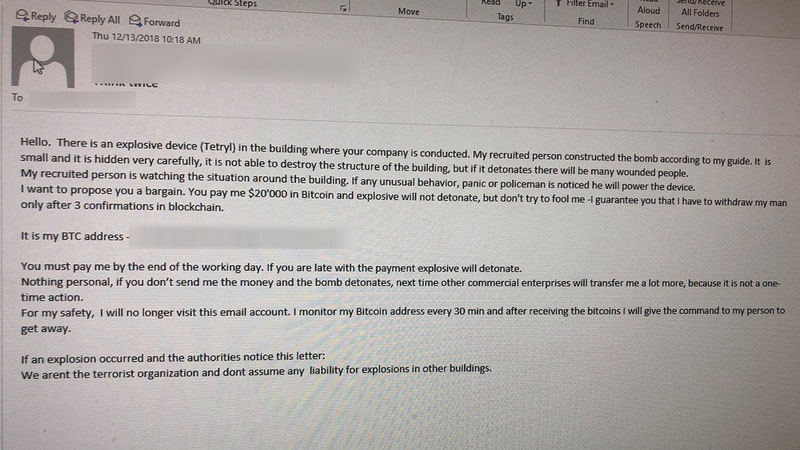 NEW YORK (WABC) -- Authorities are investigating after hundreds of what are believed to be hoax bomb threats were called in to schools and businesses around the country Thursday.

Law enforcement agencies across the country dismissed the threats, which they said were meant to cause disruption and compel recipients into sending money and are not considered credible.

Numerous locations across the Tri-State Area received threats, including the Bronx Science High School. It was evacuated at 11 a.m. after a bomb threat was received by phone.

A call came into the school saying a pipe bomb would explode in 20 minutes, and the NYPD cleared the school before the Emergency Service Unit determined there was no credible threat.

"All students and staff are safe," school officials wrote in an email. "We evacuated the school building at 11:00 a.m. after receiving a phone call of a bomb threat. Students are currently well-supervised at neighboring schools."

Students returned to the school safely in time for dismissal.

The incidents around the country are all similar in nature, with the perpetrator or perpetrators demanding money be put into Bitcoin. Some of the emails had the subject line: "Think Twice." The sender claimed to have had an associate plant a small bomb in the recipient's building and that the only way to stop him from setting it off was by making an online payment of $20,000 in Bitcoin.

Scores of threats were reported across New York City, along with numerous incidents in New Jersey and Connecticut, as well as in both Nassau and Suffolk counties on Long Island.

"Please be advised - there is an email being circulated containing a bomb threat asking for bitcoin payment. While this email has been sent to numerous locations, searches have been conducted and NO DEVICES have been found. At this time, it appears that these threats are meant to cause disruption and/or obtain money. We'll respond to each call regarding these emails to conduct a search, but we wanted to share this information so the credibility of these threats can be assessed as likely NOT CREDIBLE."

The FBI also issued a statement:

"We are aware of the recent bomb threats made in cities around the country, and we remain in touch with our law enforcement partners to provide assistance. As always, we encourage the public to remain vigilant and to promptly report suspicious activities which could represent a threat to public safety."

Across the country, some schools closed early and others were evacuated or placed on lockdown because of the hoax. Authorities said a threat emailed to a school in Troy, Missouri, about 55 miles northeast of St. Louis, was sent from Russia.

The bomb threats also prompted evacuations at city hall in Aurora, Illinois, the offices of the News & Observer in Raleigh, North Carolina, a suburban Atlanta courthouse and businesses in Detroit.

"Organizations nationwide, both public and private, have reported receiving emailed bomb threats today," Michigan State Police spokeswoman Shannon Banner said. "They are not targeted toward any one specific sector."

Penn State University notified students via a text alert about threats to a half-dozen buildings and an airport on its main campus in State College, Pennsylvania. In an update, the school said the threat appeared to be part of a "national hoax."

Officials at Columbine High School in Colorado were dealing Thursday with a bomb threat of a different sort. Students were being kept inside for the rest of the school day after someone called in a bomb threat against the school.

The Jefferson County, Colorado, Sheriff's Office said the caller claimed to have placed explosive devices in the school and to be hiding outside with a gun.

There is nothing to validate the threat was found at Columbine, where 12 students and a teacher were killed by two students in 1999, according to Sheriff's spokesman Mike Taplin.

Two dozen other Colorado schools were also temporarily placed on lockout, meaning their doors were locked but classes continued normally, as the threat was investigated.