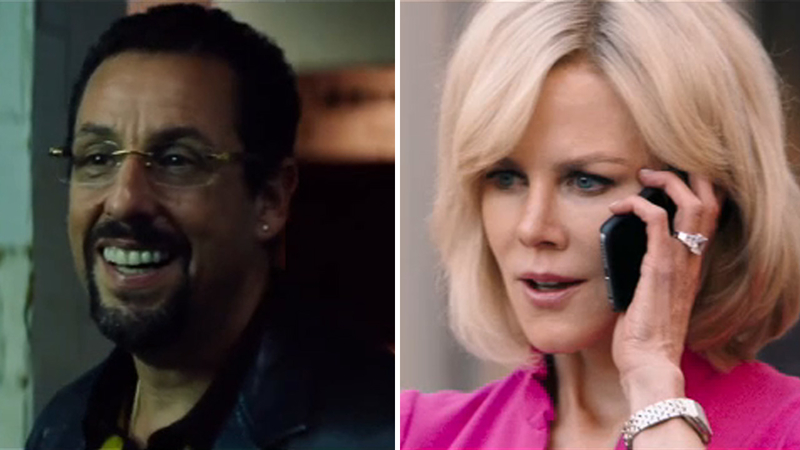 Several new movies hit theaters this weekend, including one that shows a different side of Adam Sander as the actor takes on a more serious role.

It is so truthful that it's hard to watch at times, and it made me forget all of the idiotic comedies Sandler has ever made. And yet, he still manages to draw upon his lovable persona to get us to root for his creepy character as he tries to hustle an NBA player.

Kevin Garnett plays himself so compellingly that he may have found a career after basketball, and his performance is as real as the setting of the movie in the city's Diamond District.

Sandler becomes this compulsive gambler so completely, it's hard to imagine it's is the same guy whose silly movies have grossed $2.5 billion.

Lakeith Stanfield plays his assistant and Idina Menzel his wife, and both are part of a uniformly excellent cast in a movie that grows more tense as the character's entire world starts to unravel.

Also hoping to take the box office by storm is "'Bombshell," with another funny person, Kate McKinnon, turning serious. But this one isn't fiction, as the film is based on real-life scandal at Fox News.

Margot Robbie plays a composite character in disturbing scenes with the late Roger Ailes, a role taken on by John Lithgow.

Together, they bring the harsh reality of harassment vividly to life. But Kidman is miscast, and her character remains a cipher.

I was fascinated by the nuanced portrait of four different women who all face sexual harassment in very different ways. It takes a complex case and draws universal truths from it, but "Bombshell" is so absorbing that it never feels like homework.