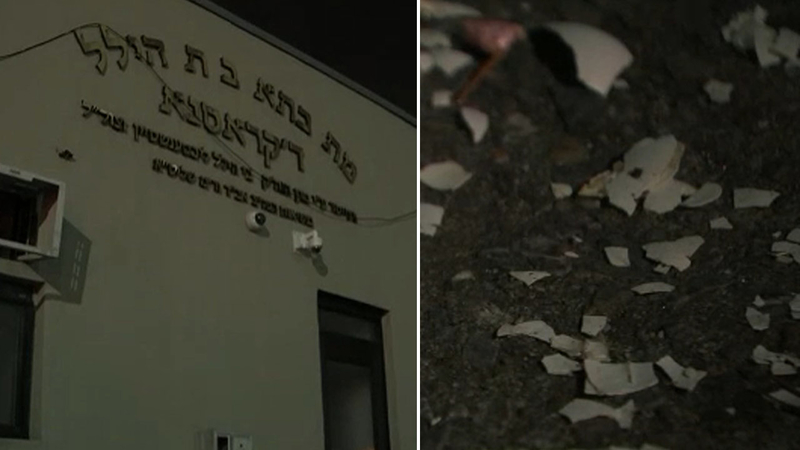 BOROUGH PARK, Brooklyn (WABC) -- Police are investigating a string of egg-throwing incidents in one area of Brooklyn over the weekend, and it is possible they may be hate crimes.

They all happened in Borough Park, and the NYPD Hate Crimes Task Force has been notified.

Authorities say the first incident involved a male who threw an egg at a 38-year-old woman walking her four children in front of 1442 38th Street just after 6 p.m. Saturday. Not all of the children were struck, but the mother, who didn't want to be identified, said it doesn't mean it's less traumatic for her children.

"They had eggs thrown at them," said the mother whose children were crying after the incident. "We're being laughed at, they felt. And then they just ran home."

The suspect fled the scene in an unknown direction.

Around 10 minutes later, police say an unidentified male threw eggs at Sanz Synagogue, located on 369 Dahill Road, striking the inside wall of the synagogue as the door opened.

The suspect, who is described as a light-skinned male and who was last seen wearing a dark-colored coat and blue jeans, fled the scene and no injuries were reported.

Shomrim volunteers and police are on scene investigating the egging of a shul on Dahill Road. #StopTheHate #EnoughIsEnough @NYPDHateCrimes pic.twitter.com/eWRgcWvvlH

The third incident occurred on Sunday just after 4 p.m. on 38th Street near 15th Avenue, where police say three male teens ran up to a 50-year-old woman who was walking with a child and struck her in the back with the eggs.

"I think it's anti-Semitic and think it's racist," the unidentified mother said. "I think Jews are specifically targeted."

The suspects fled the scene, and the female victim refused medical attention.

The investigations are ongoing, and anyone with information in regard to this incident is asked to call the NYPD's Crime Stoppers Hotline at 1-800-577-TIPS (8477) or for Spanish, 1-888-57-PISTA (74782). The public can also submit their tips by logging onto the CrimeStoppers website at WWW.NYPDCRIMESTOPPERS.COM or on Twitter @NYPDTips. All calls are strictly confidential.