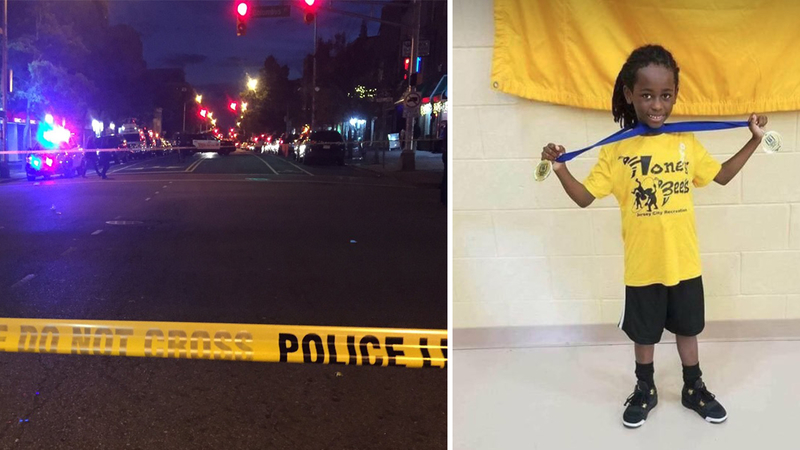 Young boy dies after hit by car in Jersey City

JERSEY CITY, New Jersey (WABC) -- Police say an 8-year-old boy known for his jump rope abilities was struck and killed by a car while walking home in Jersey City.

The child was struck at Christopher Columbus Drive and Grove Street and was transported to Jersey City Medical Center on Saturday afternoon. Witnesses say there was a group of kids walking outside, and 8-year-old Jeremiah Grant rushed across the street and was struck by an SUV.

One eyewitness was left traumatized.

Grant was a member of the Honey Bees, a champion double-dutch roping group that once appeared on "The Tonight Show."

Witnesses say at first the driver did not stop, but several good Samaritans were able to catch up to him on foot a half a block away. Jose Pimento says he wasn't driving away quickly and seemed dazed.

"I heard the screaming, so I noticed the guy was pulling away, so I ran after him and was able to stop the guy on foot. So I was able to stop him, and I start banging on his window. Another gentleman was following as well on foot and said he didn't know. He said he felt like he went over a bookbag," said Pimento.
The driver was stopped right in front of the salon where Angel Alvelo works. His coworker was one of several people who pulled the driver over.

BREAKING: cops examining this vehicle stopped half a block away from scene where child was struck in Jersey City. pic.twitter.com/eSX5l1aDW3

"He said he didn't see the kid. That's what he said," said Avelo.

The driver, a 60-year-old man from Union City, reportedly did not try to leave once they pulled him over - he says he just wanted to know what happened.

Police say the driver remained on scene, and they are not calling it a hit-and-run.

At this time, no charges have been filed and there have been no summons issued to the driver.