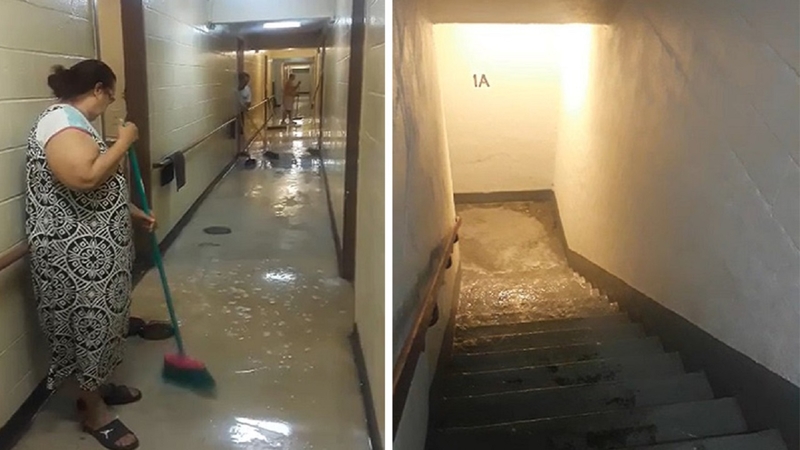 MELROSE, Bronx (WABC) -- Residents at a public housing complex in the Melrose section of the Bronx were awoken by severe flooding in the building Thursday for a fifth straight day.

Residents said the flooding began around 2 a.m. when water began spewing from a pipe, filling common areas and stairwells, and seeping into apartments.

A spokesperson for the New York City Housing Authority confirmed a leak was discovered on the 18th floor of the Morrisania Air Rights building.

The spokesperson said the leak occurred on a separate water line than the prior three pipe breaks which had all occurred on the same line.

The trouble started Sunday, when a pipe burst on the 20th floor. Staff repaired the break but the pipe burst again on the 17th floor the following day and on the 12th floor the day after that.

A NYCHA spokesperson said a break Wednesday on the same line was caused by a tenant trying to steal a washer out of an apartment on the 17th floor near the source of the second break.

Each time, residents were overcome by water.

Crews came out Thursday to clean up the mess and repair the leak.

A spokesperson said water service was temporarily suspended at 3135 Park Avenue and 3125 Park Avenue because of the break.

Elevator service was also temporarily suspended. A spokesperson said NYCHA workers were providing door to door assistance to anyone who needed it.

"We understand our residents' frustration during this time and appreciate their patience, as we work to resolve this issue and complete all necessary repairs. We must do better to provide all residents the safe, clean homes they deserve," the NYCHA spokesperson said in a statement.

A spokesperson for Mayor Bill de Blasio said city hall was also aware of the problem and monitoring the situation to make sure NYCHA worked quickly to resolve the issue.