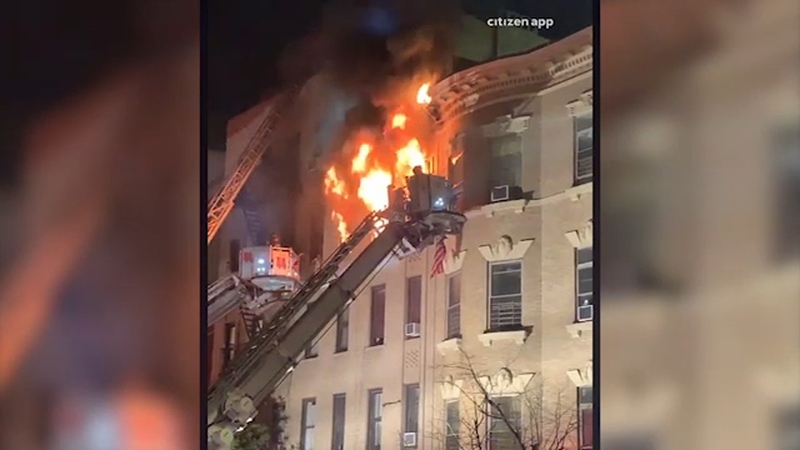 HIGH BRIDGE, Bronx (WABC) -- Eleven people were injured, including six firefighters, when flames raced through the top levels of an apartment building in the Bronx.

The flames erupted shortly before midnight, forcing more than a dozen people out of their beds.

It took until the early morning hours on Friday to put the four-alarm fire out.

It woke people up late at night and families were forced to get out fast, and many won't be able to return due to the damage.

Citizen App video showed the fire shooting out of the windows on the 5th floor of 917 Ogden Avenue in the High Bridge section.

"We had several civilians evacuating onto the fire escapes, some threatening to jump, but no civilians jumped," said Paul Miller, FDNY Batallion 17 Chief.

The Red Cross is assisting 18 people with temporary housing.

Some people even lost their pets.
"They're not here, they were running out of the apartment. I ran out, I don't know where they're at so," said Eric Soto, a resident..

"So you lost your dog and your cat, they have not been recovered yet from the fire?" Eyewitness News asked.

"And you know what," Soto added. "We're homeless."

Some residents told Eyewitness News they did not hear smoke detectors going off.

"It was scary. Smoke was coming in the door. We didn't hear any fire detectors, but we ended up having to come down the fire escape to get to safe ground," a resident said.

The fire marshal is investigating the cause, but so far it does not appear to be suspicious.