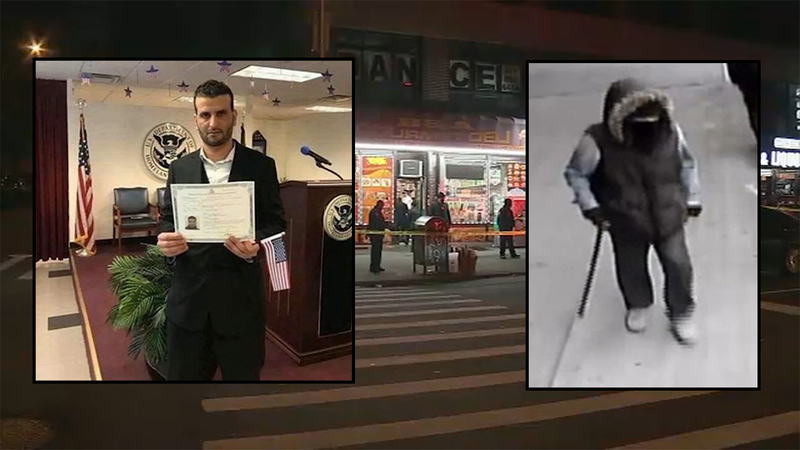 MOTT HAVEN, Bronx (WABC) -- Police hope new video of a person of interest will help them solve the shooting death of a deli worker in the Bronx.

The victim was killed when a gunman walked into the store Friday night and opened fire without saying a word.

Yehya Almunster was shot multiple times inside the B & A Gourmet Deli at East 137th and Brook Avenue in Mott Haven around 6:30 p.m.
EMBED More News Videos

Police released video of a person wanted for questioning in a Bronx deli worker's murder.

Almunster had just recently become an American citizen, and his wife is pregnant.

"I can imagine how his wife and kids feel, knowing that he just left from being with them for a couple of months to come back here, where he tried to support them...for him to die," customer Shaniekqua Davis said.. "He was a loving person to where he shouldn't have been killed."

Investigators are looking at all possibilities for a motive in the murder, including the victim's arrest for selling marijuana to an undercover officer the night before his death.

"They released him from the precinct, the next day he was dead," Davis said. "I got to make sure the candles are still lit and stuff."

The deli has been closed since the shooting, and a makeshift memorial sits outside.

"I see him every morning, and I'm still coming to see him," customer Andrea T. said. "I've lived here for five years, and he's been here."

The Yemeni Merchant's Association is offering a $10,000 reward for information that helps catch the killer. CLICK HERE for more info.