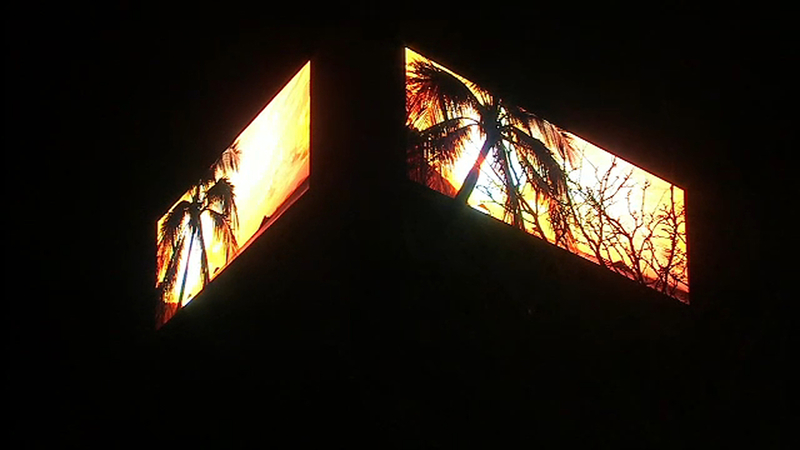 BAYCHESTER, Bronx (WABC) -- New York's mantra may be "the city that never sleeps", but some New Yorkers aren't sleeping, and they're not happy about it.

Residents of Co-Op City in the Bronx say giant bright electronic monitors are keeping them up at night, and they claim it's about to get worse.

From Sandy Krasnove's apartment, the sign is so bright it keeps her up at night.

"Very annoying at night, very annoying, yes. It just shines into your window," she said.

It reaches into Evangaline Brown's apartment too.

"It's the light, basically when I'm getting ready for bed I usually have the darkness in the window but now it's very light," she said.

The signs went up just after Christmas, a triangular set of three massive monitors that pump out advertising, mostly for liquor, 24 hours a day.

"If they just want to shut the light down at 10 o'clock at night and put the light on at 6, 7 o'clock in the morning, shut it down at night," said Krasnove.

But so far the developer who put the signs up, Baychester Retail, has been unwilling to work with the community. In fact, the company wants to put up a much larger sign.

"From what we've heard, it's going to be 300 feet high which is taller than our building," said resident Sam Schwartz.

"It's total disrespect," said New York City Councilman Andy King. "This is not I-95 or a stretch of South Carolina where there is nothing but trees. You have people's bedrooms, you have people walking by, this is where people live."

Another large sign is planned and residents fear it will change everything.

"It's going to take away the horizon, we won't have a view," one resident said.

A city agency called the Board of Standards and Appeals will decide if the new sign can go up.

"It doesn't belong in a residential neighborhood," said Schwartz.

We reached out to Baychester Retail. They did not return our calls.