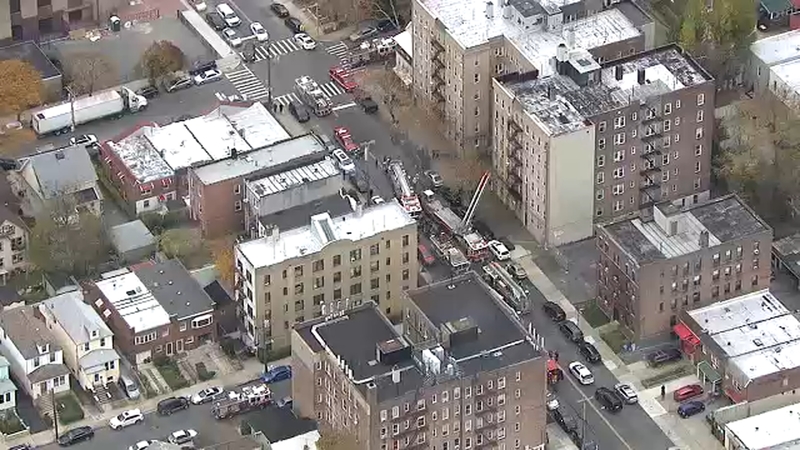 WAKEFIELD, Bronx (WABC) -- A father apparently set the couch of his fifth-floor Bronx apartment on fire after attacking his family with hot oil, officials said.

The FDNY received a call about the fire around 10:35 a.m. Friday and responded to the scene at 730 East 236th Street in the Wakefield section.

Police said the 41-year-old suspect got into a verbal dispute with his 19-year-old daughter and 18-year-old son and threw hot oil onto both of them. His daughter was holding her two-month-old child at the time, and all three sustained burns.

The oil caused a couch to catch fire, and the daughter, son and baby were able to escape the apartment.

Police said the suspect then moved to another room, where he encountered his 60-year-old mother and 87-year-old grandmother. He threw oil on them too.

They were trapped in the apartment by the couch, which was at this point in flames.

The suspect snuck out through a small crack in the door but was stopped from fleeing by other residents -- who held him down until firefighters arrived, FDNY officials said.

"He was just screaming, hollering that he was going to kill his family, was going to burn them up. It appears he was emotionally disturbed," said FDNY Assistant Chief Joe Woznica.

Firefighters were unable to break into the apartment through the door so they instead climbed up an exterior fire escape, where they rescued the remaining victims and extinguished the blaze.

All of the victims, including the suspect, were being treated for non-life-threatening burns.

A firefighter was also being treated.

The suspect was taken into custody, officials said. Charges against him are pending.
An investigation is ongoing.

Note: Fire officials originally told Eyewitness News that the suspect was accused of setting his couch on fire in an attempt to kill his three children and her mother. The youngest victim's age was originally reported as 19 months old.