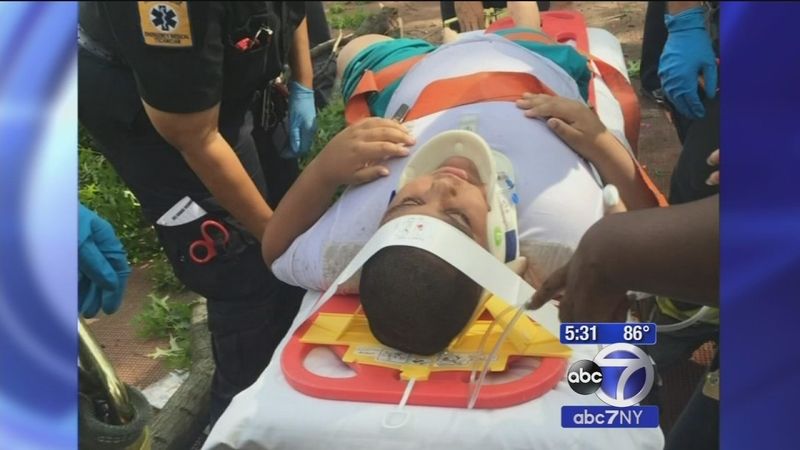 WEST FARMS (WABC) -- Two stepbrothers in the Bronx were injured, one seriously, after a tree branch came crashing down, striking both of them.

It happened in Bronx River Park on East 180th Street and Boston Post Road in the West Farms section at 3:30 Monday afternoon.

9-year old Edward Reyes and 8-year old Justin Reyes were making water balloons with their friends when they heard a loud noise.

Seconds later, a large branch fell on top of them.

Both boys were rushed to Jacobi Hospital. The Parks Department is investigating, and the park is closed.

"I didn't have time to see the branch or anything. When I went back to the park last night then I saw how big it was and I was like, oh my God, they alive. Thank God," said the victims' mother, Zuleika Hernandez.

Clinching his little fist in pain, Edward tried to put on a brave face as his mother knelt down by his side.

"He was like nothing hurts, I said what happened? He said, I don't know, I was on the bench and that's it," Hernandez said.

The 8-year old's will is apparently stronger than the tree branch that snapped and fell down on he and his stepbrother.

"We were filling up water balloons, and then this tree fell out of nowhere," Edward said. "Then this guy said, watch out, and I fainted. When I woke up I was sitting on the bench next to my cousin and crying."

Tuesday, the park remained closed while the incident is under investigation.

The Parks Department says this is a "rare and unfortunate accident", and "our thoughts are with Justin and Edward, and we wish them a speedy recovery."

"My stepbrother, he tried to save me," said Edward. ('What happened?', we asked) "The tree fell on both of us and he tried to push me out of the way, and that's how he got a broken foot and his spine is broken."

Justin is a lot worse off with a broken leg, and back and head injuries.

NYC Park Advocates is critical of the city saying, "We have been calling on a dramatic increase in tree inspections by licensed professionals and a budget allocation that is desperately needed for tree maintenance."

All of this is still too soon for the families, who are praying the boys are OK.