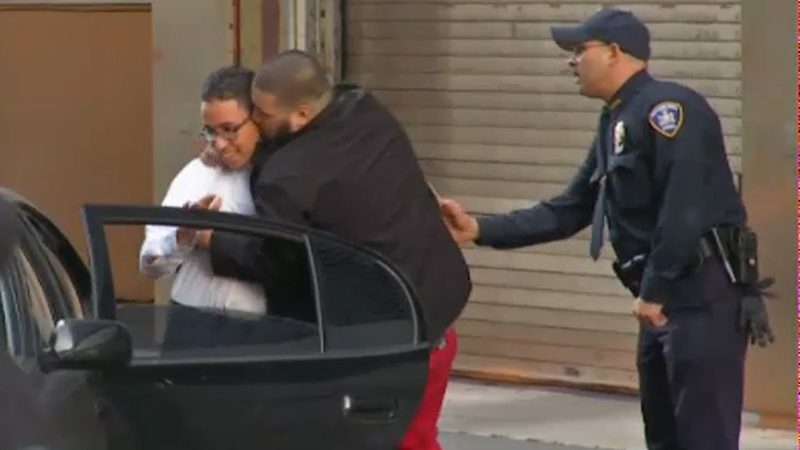 BRONX, New York (WABC) -- The teenage suspect charged in a fatal stabbing inside a Bronx school was released Wednesday after a judge lowered his bail.

Abel Cedeno emerged from the Bronx Criminal Courthouse just after 3 p.m. and into the arms of a waiting friend, who then guided the 18-year-old into a black car that quickly pulled away.

Earlier, Cedeno's lawyers convinced a judge to lower bail from $500,000 to $250,000, money raised with the help of state Senator Rev. Ruben Diaz, Sr., and member his Bronx church.

Cedeno offered his gratitude in a written statement, saying, "I am grateful to the people who donated to my bond fund, which allowed my release. I promise you that your faith in me will never be betrayed. You are, in the words of Shakespeare, 'less than kin but more than kind.'"

Earlier this month, Cedeno pleaded not guilty to charges of manslaughter and assault in the death Matthew McCree. Prosecutors say Cedeno fatally stabbed his 15-year-old classmate two months ago in a classroom at the Urban Assembly School for Wildlife Conservation.

The victim's mother voiced her outrage after the bail hearing.

"I'm pissed the hell off," Louna Dennis said. "I'm pissed. He gets to go home with his family for Christmas. My son is in a fricking cemetery. Fricking in the dirt. And he gets to go home to his family? I'm pissed the hell off, and at this point, I feel like the system is failing me."
Report a correction or typo
Related topics:
new york citybronxschool stabbingstudent diesstabbing
Copyright © 2022 WABC-TV. All Rights Reserved.
TOP STORIES
Onlookers urged police to charge into TX school: 'Go in there!'
Vigil held for 19 children, 2 teachers killed in TX school shooting
3 homicides in 3 hours in Brooklyn, police search for gunmen
Car fatally hits 1-year-old girl, injures mother on Staten Island
Adams to meet with NYC business leaders in wake of subway shooting
NYPD officers reunited with blind man they rescued from subway tracks
AccuWeather: Clouds return, PM shower possible
Show More
Uvalde school shooting: What we know about 19 kids, 2 teachers killed
After shootings, Hochul looks at raising age for guns in NY
Former Capital Cities/ABC Chairman and CEO Tom Murphy dies at 96
Alleged shooter in unprovoked subway murder ordered held without bail
NYC mayor, chancellor call on parents to take role in school safety
More TOP STORIES News