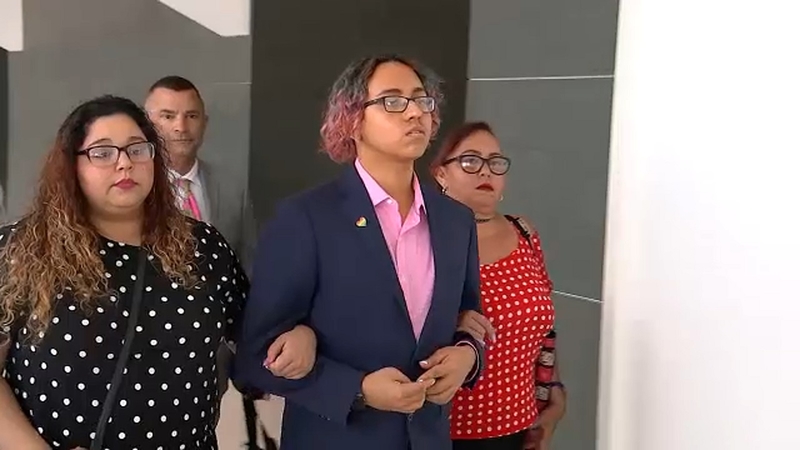 NEW YORK (WABC) -- A teenager who fatally stabbed a classmate inside a school in the Bronx in 2017 was found guilty of all charges Monday.

Abel Cedeno, 19, blamed years of bullying because of his sexuality and testified on his own behalf, saying he stabbed 15-year-old Matthew McCree and 16-year-old Arane Leboy at the Urban Assembly School for Wildlife Conservation after McCree punched him.

McCree died from his injuries, while Leboy was severely injured.

Cedeno was convicted in the judge trial of first-degree manslaughter, first-degree assault and fourth-degree criminal possession of a weapon. He was remanded and will be sentenced on September 10.

"In a matter of seconds, the defendant took out his knife and stabbed two students in front of a crowded classroom, killing 15-year-old Matthew McCree and critically wounding Ariane Laboy, then 16," Bronx District Attorney Darcel Clark said. "The incident has forever traumatized the young students and school faculty who watched in horror the violence that unfolded that morning. It is truly a tragedy; a young life was taken, and so many other lives -- including the defendant's -- are irreparably damaged."

McCree's mother said she was grateful for the verdict.

"I got justice for my son," she told reporters.

In an exclusive interview with Eyewitness News after his arrest, Cedeno said he took a knife to school because he feared for his safety.

Robert Feldman, Cedeno's attorney, said McCree came at his client from 50 feet away after taunting Cedeno.
Under cross-examination from Prosecutor Nancy Borko, Cedeno testified that other students were throwing things at him in class.

As he was leaving, he said he was approached by McCree, who punched him several times.

Cedeno faces up to 5 to 25 years in prison on each of the manslaughter and asssault charges.