7 On Your Side: Bronx woman says she's penniless after rental rip-off 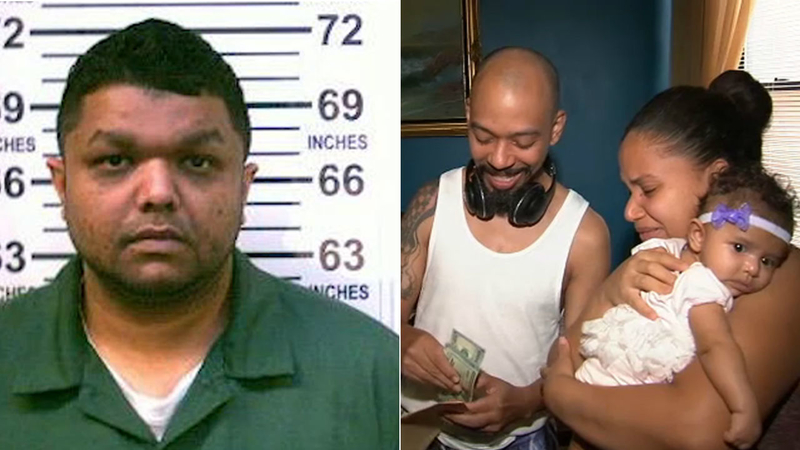 7 On Your Side: Bronx woman says she's penniless after rental rip-off

RICHMOND HILL, Queens (WABC) -- A Queens man has been arrested and charged with multiple counts of grand larceny after allegedly offering an apartment for rent, collecting tens of thousands of dollars in deposits and not renting the unit or returning the money.

It turns out this isn't the first time the suspect has done time for the same crime. A young family was out thousands until they got Nina Pineda and 7 on their side right in the nick of time.

7 On Your Side tracked ex-con Shahab Khan down in North Carolina after talking to his mother who was living in the Queens apartment building one family thought they were moving into last June.

The mom, Bibi Khan, owns the home in Richmond Hill. Last Spring the first-floor unit was listed for rent. It was perfect for the young family expecting their first child.

"She saw it, she took pictures, she was in the apartment it looked good, sounded good," renter Roberto Diaz said.

"The plan was to move June 1st," Barbara Baez said.

She gave the landlord a $3,600 cash security deposit and he issued a receipt. Little did she know, the person she gave that money to was convicted of grand larceny years ago.

In 2011, Khan was arrested in Queens. Eyewitness News interviewed many of the renters who paid him security deposits for the very same first-floor apartment in his home that was never actually available for rent.

Khan said he spent three years in jail and paid back $53,000 -- the full amount owed for restitution.

All his latest victims got back from Khan was a check that bounced.

Their baby was born and the family had no place to live. They've been forced to move in with his parents as Baez returned to work at JFK two weeks after her C Section and ICU stay to try to earn money for another apartment.

7 On Your Side spoke to Khan over the phone, "You took their money in May, correct? She was going to move with her newborn baby. You know they're sleeping on a couch?"

After 7 On Your Side got involved, Khan express-mailed another check. But that bounced too.

After the check bounced, Nina Pineda reached Khan by phone, "You're doing the same thing that landed you incarcerated, renting an apartment, taking money and not giving it back."

After dozens of texts and calls, Khan finally met up with 7 On Your Side in person and blamed the bounced check on the bank. But he came up with the bulk of the refund -- $3,000 in cash.

7 On Your Side surprised the couple with the special delivery.

7 On Your Side got the refund just in time. The very next morning, the Queens District Attorney arrested Khan again.

He was charged with 14 counts of grand larceny. The complaint stated he took more than $36,000 in deposits for rentals that never happened.

Khan is due back in court in January.

If using the app, click here to send us a news tip
Report a correction or typo
Related topics:
richmond hillqueensnew york cityrental property7 on your sidescamrental scams
Copyright © 2021 WABC-TV. All Rights Reserved.
7 ON YOUR SIDE
Passport backlog has travelers scrambling, frustrated
Tabernacle damaged by out-of-control NYPD SUV gets payment
Should you Buy Now Pay Later with purchases?
7 On Your Side helps customer avoid hot tub hustle
TOP STORIES
Olympic champion Simone Biles out of team finals
Man stabbed in dispute outside Midtown Manhattan strip club
Arrest made in string of lewd incidents in NYC subway system
Lifeguard may have been bitten by shark at Jones Beach
Police to detail violence, injuries at first January 6 hearing
AccuWeather: Dry heat & sunny
Suspect sought in anti-Muslim attacks in Queens
Show More
Uber driver, his passengers among 5 killed in Long Island crash
Search on for thieves after restaurant workers' scooters stolen
5 unvaccinated nypd officers hospitalized, 'some quite serious'
COVID Updates: US could see 4,000 deaths per day by October
Koreas agree to restore communication channels, improve ties
More TOP STORIES News
Send us your questions, issues, and story ideas to Nina by filling out the form above, by emailing 7OnYourSideNina@abc.com, or contact Nina on her Facebook page or tweet her at Twitter @7OnYourSideNY! You can also call the 7 On Your Side Hotline at 917-260-7697.