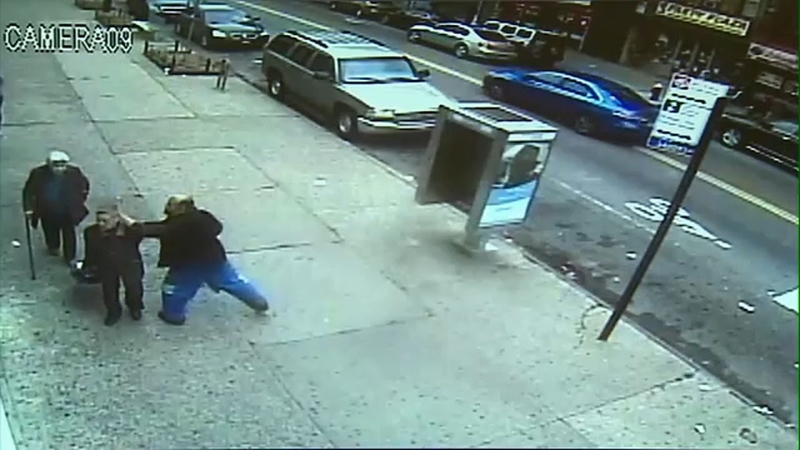 BROWNSVILLE, Brooklyn (WABC) -- It was 10 a.m. on Mother's Day in Brooklyn. One woman was pulling a shopping cart and another woman is using a cane. A man walked toward them while talking to himself, and attacked them without warning.

In an instant, the man is confronted by another man who witnessed the attack and chases the suspect down and tackles him.

The two women, both in their seventies, were dazed. One woman was bleeding badly from her head.

Shopkeepers and residents converged on the scene as the Good Samaritan struggled in the distance to restrain the man until police arrived.

The attack happened outside Shoppers World in Pitkin Avenue in Brownsville. Store manager Jacaira Baez could not believe what happened.

People were so impressed, they shook the Good Samaritan's hand. He told witnesses he was homeless and refused to look the other way.

"Thank God he was there," says eyewitness Karla Johnson.

The two women were treated for their injuries at Brookdale Hospital and were later released.

The Good Samaritan's identity was not released.

The suspect will be arraigned in criminal court on Monday. He has been identified as Andres Flores, 45. Flores is charged with two counts of assault.