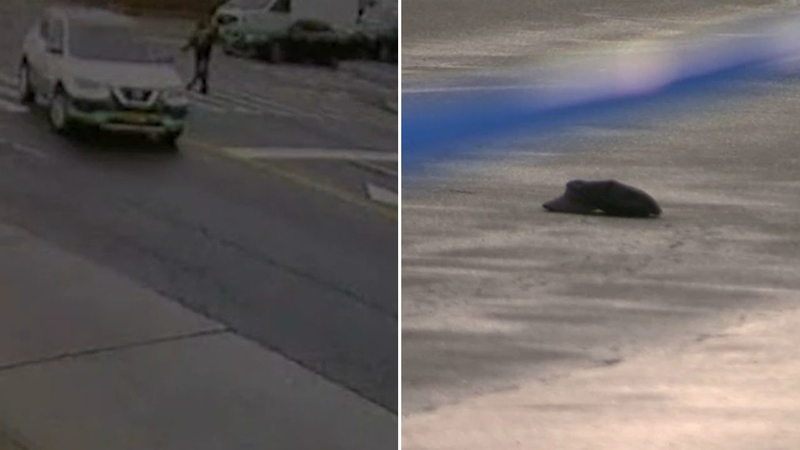 CANARSIE, Brooklyn (WABC) -- The heartbroken family of a 70-year-old woman killed in a hit and run in Brooklyn is speaking out and demanding justice.

Maria Lorente died Friday after being struck by a car on Flatlands Avenue and East 78th Street.

She was found in the roadway unconscious and unresponsive with severe trauma about her body.

The driver took off from the scene, and now, her son wants the person responsible to come forward.

"Every morning I go to work, 'Please be safe, be careful,'" Jose Tapanes said.

He cannot fathom that he lost his vibrant mother, or that someone would hit her, obviously hurt her terribly, and just drive away.

"He was not paying attention," he said. "You gotta remember, you have a piece of machinery, you're talking about anywhere between a ton to God knows how many tons. You know, you can kill anybody."

Lorente had the light and was in the crosswalk, but surveillance video shows the the driver never slowed as he ran her over, briefly paused, and then fled the scene.

"I don't wish nothing bad on anybody, even if they've done wrong to me," Tapanes said. "But I do say to that person, please turn yourself in. Turn yourself in. You know know you did wrong."

Tapanes is an only child, and his parents live in Florida and were here for the holidays.

They were visiting their old neighborhood, where Lorente was a beloved neighbor for decades.

"She was spunky, she always had energy, always happy," Tapanes said. "With all the problems she had, she overlooked everything. I'm not saying that because she's my mother or trying to make a big theatric. I mean, she was genuine."