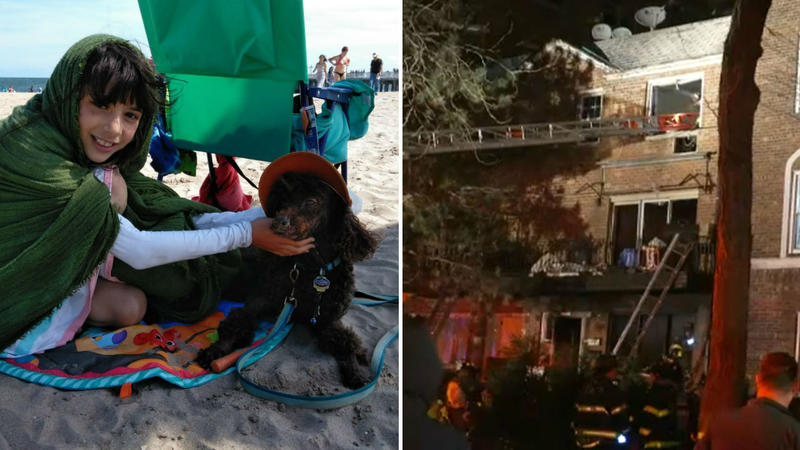 MIDWOOD, Brooklyn (WABC) -- An 11-year-old girl has died after a smoky fire tore through a home in Brooklyn's Midwood neighborhood.

The blaze broke around 10:30 p.m. Monday at a three-story home on Ocean Parkway and Foster Avenue.

"We get out from the house and everybody is running like crazy," an eyewitness said. "It was so heavy, all you could see was a cloud of gray."

Firefighters battled flames on both the first and second floors.

While one crew was fighting the fire from the outside, another was inside trying to save lives. But those heroic efforts were too late, and the girl trapped inside was found unconscious and unresponsive.

First responders believe she was overcome by smoke.

Medics transported the girl, identified as Shirr Teved, to Maimonides Medical Center, where she was pronounced dead.

"I don't think words can really express something like that," neighbor Alvin Pall said. "I feel very bad about that. You know, I'm really sorry for them. I'm sorry anyone has to live through the death of their child."

Pall also described the thick, black smoke with which firefighters had to contend.

"I can't even imagine it," he said. "I don't know how the firemen were able to get in. To tell you the truth, that's how heavy the smoke was. It was so heavy, all you could see was a cloud of gray on top of this building, the building next to it."

Those who knew the victim say she loved dogs and cats and used to feed stray cats in the neighborhood.

Friends say Teved was in and out of foster care and her home life was far from stable.

Teved's parents and community gathered together later Tuesday night for her funeral service in Borough Park. Her body will be flown back to Israel.

One firefighter was also injured battling the blaze and was taken to the Cornell Burn Unit at New York Presbyterian Hospital in stable condition.

Fire investigators are now working to determine what sparked the blaze. Preliminary indications were that the fire was not intentionally set, but rather a tragic accident.