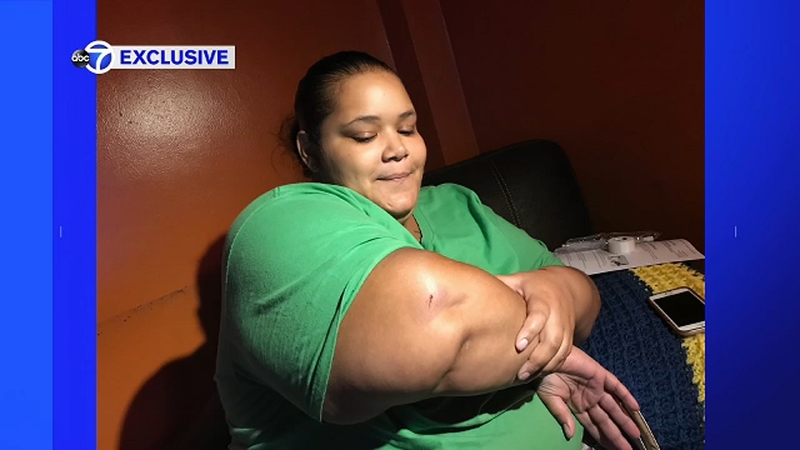 EXCLUSIVE: Woman shot on way to job interview in Brooklyn.

DOWNTOWN BROOKLYN, Brooklyn (WABC) -- A mother of three was shot Friday on her way home from a job interview in Brooklyn. She was one of three injured after gunfire erupted at Fulton Mall. The shooter is still on the loose.

Stephanie Villanueva suffered a bullet graze wound to the hand and another to her elbow.

"I ran - I didn't even feel my arm get grazed by the bullet," said Villanueva," midway crossing the street I heard the shots."

Villanueva was in the wrong place at the wrong time. As she crossed the street she says she saw a group of people arguing.

Police say that group got into a fight with a 28-year-old man in front of a Gap factory outlet at the mall. One of the men then pulled a gun. Chaos began as shoppers and pedestrians ran for cover.

Police say that gunfire not only grazes Villanueva, but also hit the man who was the intended target, and a 31-year-old guy right in the leg. He, along with the other are expected to recover.

Villanueva says she is counting her blessings.

"Thank God - he spared my life, because if wasn't, my three kids would have been without a mom," she said.