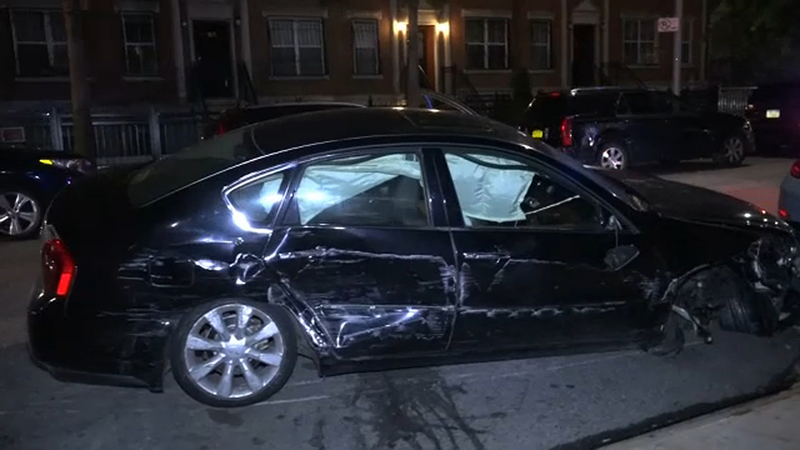 BUSHWICK, Brooklyn (WABC) -- A 23-year-old man has been charged with DWI after jumping a curb with his car and slamming into several pedestrians in Brooklyn early Monday morning, police say.

The accident happened just after 5 a.m. Monday on Halsey Street in Bushwick.

At least 20 people were standing on the sidewalk when the car jumped the corner, began striking people in the crowd, lost a wheel and then sped away.

Six people were injured. Four of them were hit by the car and taken to the hospital. None of the injuries are believed to be life-threatening.

One of the victims wept as she described what happened to Eyewitness News reporter Kemberly Richardson.

"I happened to turn and look because we heard the sound of something crashing. He had to be coming down at least 50 miles per hour, maybe more," said Latoya Robinson.

Police tracked down the 23-year-old driver a few blocks away and arrested him.

Investigators later identified him as Naquan Ricks, charging him with DWI. According to witnesses on Halsey Street, minutes before the crash he was fighting with some men up the block.

"The guys who were out there were telling him to go away and he was doing too much and I guess an altercation happened," Brodie said

That's when police say Ricks got in his car, stepped on the gas and floored it, striking people and leaving a path of destruction. A tire came off the suspect's car after he slammed into a heavy metal fence. He put the car in reverse and then drove forward, further down the sidewalk.

"Once he moved the car and I seen who was hit, now it's like time to spring into action, you've got to help as soon as possible," Robinson said.

She ran to help their friend, Lindsey Powell, who has asthma. She was the most severely injured.

"My thing was get her back to breathing, flip her, I got cold water and threw it on her, she was like AHHHH... I was like breathe, breathe," Robinson explained.

Lindsey was taken to the hospital. That's where Ashana crossed paths with Ricks.