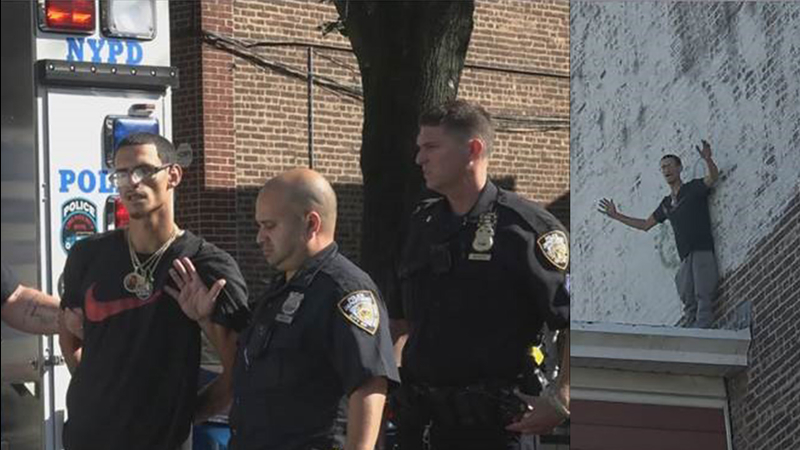 CYPRESS HILLS, Brooklyn (WABC) -- The commanding officer of a Queens police precinct and nine other cops were injured during a police chase in Brooklyn Tuesday.

Sheriff's officers attempted to pull the driver over near Etna Street and Chestnut Street in Cypress Hills for a broken tail light, but the driver, 25-year-old Justin Valentine, refused.

The vehicle then rear-ended an unmarked police cruiser, occupied by Capt. Victoria Perry, the commanding officer of the 104th Precinct in Queens.

Perry was not injured, and in fact, jumped out of the cruiser and chased after the vehicle on foot.

Four officers from the 75th Precinct were on their way to the call when they were involved in a crash. Five additional officers sustained minor injuries while attempting to apprehend the suspect.

Valentine was eventually located standing on the roof of a nearby building, threatening to jump.

Law enforcement managed to talk him down and take him into custody.

Charges are pending, including reckless endangerment, criminal contempt, unauthorized use of a car, disorderly conduct, assault on a police officer and leaving the scene of an accident.

His female passenger is in custody as well. Marijuana was recovered in the car.

The vehicle had $761 in unpaid traffic tickets and was wanted for seizure by the city's Sheriff's Office. It had been seized by the City Marshals, and then stolen back, allegedly by Valentine.