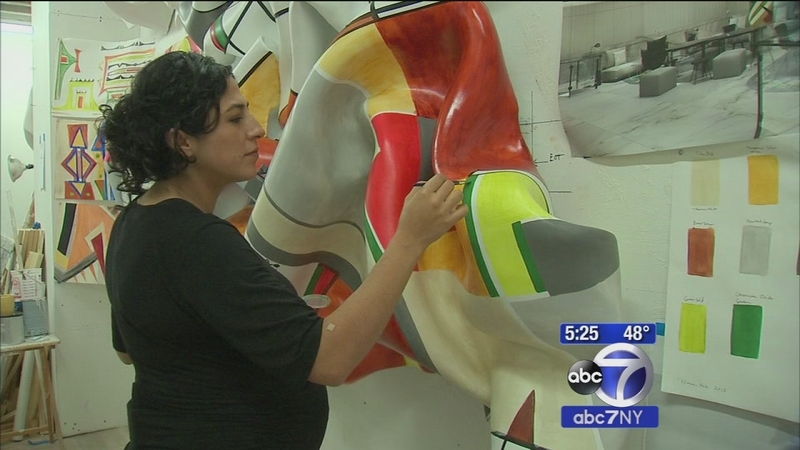 WILLIAMSBURG (WABC) -- A massive building is going up in Brooklyn, and developers are embracing the artists in that borough.

Marela Zacarias calls one piece Mannahatta, the name the Lenape people gave the island of Manhattan long before Europeans arrived. It also means "hilly," which is echoed in the work, which will be 20 feet by 25 feet when it's finished.

"It's created with window screen, so it has a lot of movement to it," Zacariass said. "And then we spend a lot of time building layers with plaster joint compounds and polymer to make it hard like fiberglass."

Once the pieces are fitted together, they'll actually form the shape of Brooklyn. It is where the piece is being made and where it will ultimately reside, where the Lenape also once lived.

"I wanted the piece to honor the past as we're moving into the future," Zacarias said.

And the William Vale Hotel that's going up in Williamsburg is that future, with Zacarias' piece set to hang in what will be the lobby.

"It's actually going to be extremely well exposed when you think about that," she said.

The developer is based in Brooklyn and called on the Brooklyn Arts Council to find an artist for the project.

"The William Vale developers came to us and said we're building this hotel in Williamsburg, and we really want a big commission in our lobby," the council's Courtney Wendroff said. "We want to spend $200,000 for an artwork, and we got really excited because that is a huge commission and a really big opportunity for a Brooklyn-based artist."

The non-profit put out the call, and 200 local artists applied. A jury ultimately chose Zacarias and her design, with her Native American references, in April.

"Brooklyn is an amazing, beautiful place, and so the fact that I get to have one of my works and contribute to the culture to this area is an enormous honor," she said.

And the commission is helping to keep art alive in the borough.

"This piece isn't just supporting me and my studio, but it's giving work to seven of us, who are a team," she said.