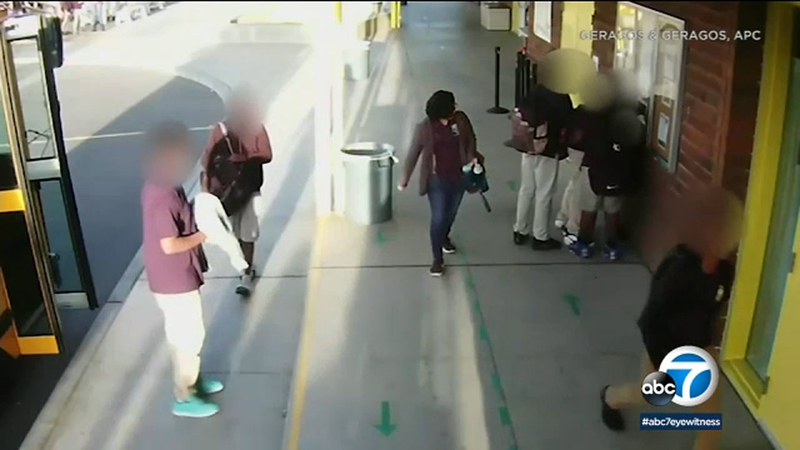 LOS ANGELES -- The family of a boy who was bullied at a Los Angeles charter school is suing the school and the organization that manages it.

The family and their attorney claim that the boy was bullied so badly, he is now suffering from permanent brain damage and it is the school's fault. The boy was 12 years old at the time.

The boy's mother requested that their identity remain confidential.

Video of the incident, which took place at Animo Westside Middle School back in January of 2018, shows the boy being pushed and punched by an 8th-grader before other students crowd around them.

According to the lawsuit, he was then put in a chokehold in an effort to make him pass out. A teacher is seen walking by in the video, but instead of stopping the incident, she appears to continue on her way.

The complaint alleged that the 12-year-old boy lost consciousness twice.

"That's not kids being kids. Kids should never be like that," said Ben Meiselas, the family's attorney. "That was a violent and almost lethal assault, and the school district, Green Dot, took absolutely no measures to protect my client."

MRI images of the boy's brain show a noticeable difference between the left side and right side, according to the complaint, which claims he also suffered permanent spine damage and post-traumatic sleep disorder.

The charter school is connected to the Los Angeles Unified School District, but the organization that oversees the school is Green Dot.

The lawsuit is asking for unspecified damages.

A request for comment from the Bill and Melinda Gates Foundation, which funds the school, and the school itself was not immediately returned.

A statement from Green Dot said, in part:

"Green Dot is committed to working to ensure all our students receive a quality education in a safe environment where they can learn and grow. We are naturally concerned by the incident portrayed in media coverage."