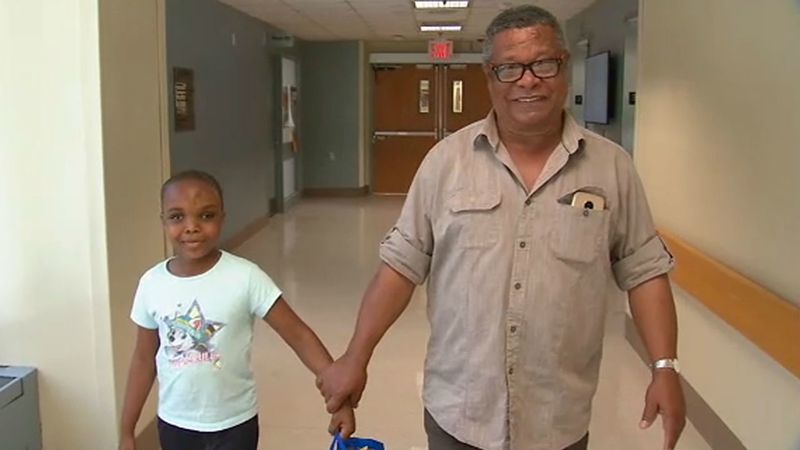 NEW HYDE PARK, Nassau County (WABC) -- A little girl from Ghana is getting ready to enjoy Father's Day at home with her father rather than in a hospital, where she has spent quite some time over the past year and a half.

In January 2017, 7-year-old Savana Patterson was mowed down by a truck in her native Ghana. She was waiting for her school bus. The 12-year-old girl Savana was standing with was killed.

Savana suffered significant injuries to her head and left eye. She was in a medically-induced coma for six weeks. This March her father, Isaac Patterson, was able to bring her to the United States.

He brought her to Cohen's Children's Medical Center for plastic surgery to repair her face. The pulsations in her brain could be seen under the skin of her forehead.

On June 4, Savana received a four-hour surgery to repair her skull. Doctors took a piece of bone from the back of her head and used it to fix the front of her skull.

"I'd like to thank all the doctors for taking good care of me, and my Dad also," Savana said Thursday.

Isaac Patterson said he knew everything was going to turn out fine.

"I have my believe in the Lord, and I also believe in medicine," he said as he thanked Dr. Nicholas Bastidas, who performed Savana's surgery.

"She wanted to go home like two days later, I kept her, I think, an extra day because I just wanted to be safe," said surgeon Dr. Nicholas Bastidas.

Bastidas gave Savana a dictionary Thursday because she said she wants to be a doctor when she grows up.