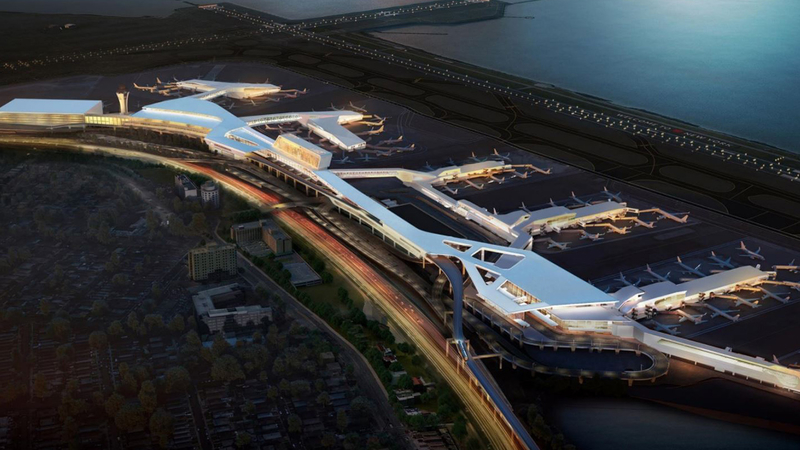 FLUSHING, Queens (WABC) -- It's going to be a beautiful front door to New York, Governor Andrew Cuomo said in kicking off the next phase of renovating LaGuardia Airport in Flushing, Queens on Tuesday.

Phase 2 is replacing Delta's aging terminal with a state-of-the-art facility.

Of the 37 gates, 33 will have access to dual taxi lanes, which will greatly improve airfield efficiency, resulting in reduced taxi time to and from the gate before take-off and after landing.

It’s going to be a beautiful front door to New York. pic.twitter.com/zNNCpWLUYG

"LaGuardia is a pillar of New York's transportation network, but for too long the airport has been unworthy of New York State," Cuomo said.

Delta announced last month that it would fund the bulk of the project, which will cost an estimated $4 billion. The Port Authority of New York and New Jersey contributing up to $600 million of the cost.

So the question is will part 2 of this project make the traffic even worse? A spokesman from the Governor's office says no. This time around, they say, there is less roadwork and more preventive measures being taken...

The new LaGuardia will become one, single airport stretching nearly a mile, instead of 4 terminals, and the design also moves the footprint 600 feet closer to the Grand Central Parkway, creating 240 percent more room for flight operations.

"As we try to squeeze as many passengers as we can, that wanna get to NY..it's gonna be huge," Delta CEO Edward Bastian said.