Newark residents, in the dark for weeks, ask for help 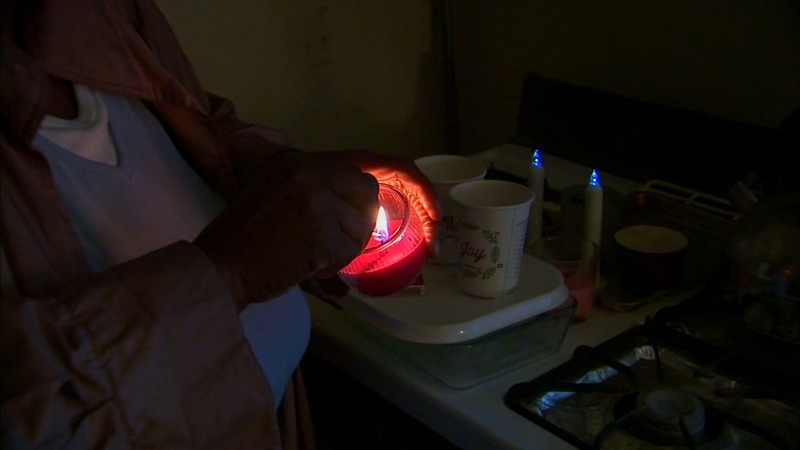 Newark residents, in the dark for weeks, ask for help

NEWARK, New Jersey (WABC) -- They were stumbling around in the dark for weeks, reading by candlelight with no refrigerator, no television. These Newark residents really felt powerless, in more ways than one.

"They came out here in the middle of the night and shut our lights off." Tammy Whitehurst's been lighting candles since the end of October. She has no food in her fridge, can't watch TV, and most days just sits around in the dark. "We've been without lights for 25 days."

The electricity got turned off to the whole building, a multiple family home where 10 people live, after a light fixture in her apartment began leaking during a rain storm.

"I had to buy C batteries, AA (batteries) to keep these things going," said Tammy. "I get ready in the pitch black."

Upstairs on the third floor, Chrystal Meryweather's trying to raise kids in the dark. "We've been eating out. i'm just totally broke. It's been hell here. It's hard getting dressed. My mom collapsed on me in here. I freaked out."

The tenants said their landlord blamed the City of Newark.

"I was told the City of Newark code enforcer was supposed to come out but he didn't come out," said Meryweather.

When Chrystal called the city to complain, she was told the landlord hadn't fixed code violations to get the power back on.

But later, landlord Curtis Wright did shoulder some of the blame, saying his repairs had been delayed. But it was now finished and ready for inspection.

But the residents were still powerless, until we contacted the city and within minutes, their inspector came out and...

"Lights are on," beamed Chrystal. "Thank you Channel 7. Thank you!"

"Y'all put the hammer down on them," said Tammy as she wept some tears of joy. "Thank you. I'm just so happy."

A big tip of the hat to inspectors at the City of Newark and PSE&G. Just minutes after we called - the utility sent a crew out to inspect one last time and restore power.

If using the app, click here to send us a news tip
Report a correction or typo
Related topics:
businessnewarkpsegpower outage7 on your side
Copyright © 2021 WABC-TV. All Rights Reserved.
7 ON YOUR SIDE
Passport backlog has travelers scrambling, frustrated
Tabernacle damaged by out-of-control NYPD SUV gets payment
Should you Buy Now Pay Later with purchases?
7 On Your Side helps customer avoid hot tub hustle
TOP STORIES
NY, NJ weighing mask guidance after CDC shift
Parts of NY, NJ have 'substantial' risk of COVID transmission: CDC
Simone Biles withdraws from all-around competition at Summer Games
McCormick spices recalled due to salmonella risk
SUV slams into pizzeria and cell phone store in NJ
Bob Odenkirk hospitalized after collapsing on set
AccuWeather: Spotty storms, cooler
Show More
Biden to announce vaccine mandate for all federal employees: Sources
COVID Updates: 100 million eligible Americans still unvaccinated
Woman wanted in disturbing anti-Asian attack in Columbus Circle
2 Colorado officers arrested after 1 hits suspect with gun
Will new COVID concerns impact air travel in NYC?
More TOP STORIES News
Send us your questions, issues, and story ideas to Nina by filling out the form above, by emailing 7OnYourSideNina@abc.com, or contact Nina on her Facebook page or tweet her at Twitter @7OnYourSideNY! You can also call the 7 On Your Side Hotline at 917-260-7697.